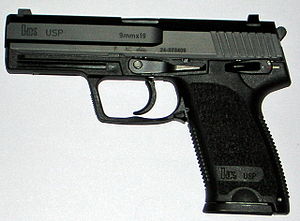 Weapons from the H&K, which has undoubtedly gained great fame all over the world is the legendary MP5, whose serial production began in 1966 year, and it continues to this day in various variants - in addition to the current flagship A3 version. Dzisiaj jednak zajmiemy się pistoletem samopowtarzalnym USP, whose production company H&K started in 1993 year.

How was it made? In year 1991 firma HK otrzymała zlecenie jednostek specjalnych US Navy na konstrukcję pistoletu. The Mk 23 SOCOM. Even before the start of serial production for the army, the manufacturer planned to start producing a version of the pistol for the civilian market.

Probably thanks to the company's marketing strategy, who wanted to bake 2 baking with one stone (it would be a pity to waste the potential of the structure developed for the military and not "use" it on the civilian market) Civilians were also hit with a piece of good equipment ...

It sounded like I had a grudge against HK, that it gave us the ability to use the USP - of course it is not. This is probably one of those businesses where both sides do well - the producer and his customers. But enough about economics, or what else to call it ...

The opinions of the professionals speak for themselves – USP i jego rozwinięcia takie jak Compact są konstrukcjami, which have built up a great reputation. The workmanship of this weapon is at a very high level, the material in the structure is deliberately bonded to the metal in this way, that the weapon is as durable as possible. The so-called "torture" tests confirm, that the USP is also reliable there, where some guns just give up. If we were to recommend someone a weapon for self-defense, then HK USP and his brother USP Compact would be on the proposal list. It is worth mentioning a few seemingly minor amenities introduced by Heckler. One of them is the innovative resistance-return device, which helps to reduce the recoil when shooting - it is a twin technology, to the one that Glock recently boasted about presenting the 4th generation. As you can see at the beginning of the years 90 she was known.

A durable cartridge chamber with a proven locking system makes it possible to use stronger ammunition. The hammer, finished with a special coating, tightens even with a damp finger.

The principle of operation is based on the short recoil of the barrel.

Trigger mechanism with hammer impact mechanism. The gun can be equipped with an adjustable safety fuse and a hammer release.

Power: from double-row box magazines. The magazine latch on both sides of the pistol grip.

Thread pitches for a polygonal barrel depending on the caliber:

Fixed sights. Made of plastic (magazine frame and boxes), and steel. Magazine capacity depending on the caliber and version of the gun.