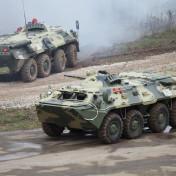 Operations in Beslan, in the theater on Dubrovka, operations ,,special "in Dagestan, in Ingushetia, the war in Georgia - these are frequent snapshots in news services showing the true face of the Federation. Wounded or killed children are always in the foreground, carried in their hands by people covered in blood, in torn clothes, okopconych. Everyone in the background is running around somewhere, nieopisany chaos and panic, and this to the accompaniment of the hurricane fire of the Spetsnaz attacking the ,,Islamic terrorists ", the sounds of ambulances trying to enter or exit.

A frequent hero of such news is the eight-wheeled BTR armored personnel carrier 80, which he usually rides on ,,on top "a commando landing in multi-colored camouflages, sphere helmets and sports sneakers on the legs. Nothing unusual, because this structure, next to the tracked BMP carrier, is the basic means of transporting the Russian army to combat areas. For our luck, all armored personnel carriers used by the Polish Army are technologically obsolete and relatively easy to destroy. Compared to the American Stryker, or our Rosomak are museum objects. BTR 80 is structurally derived from the BTR family 52,60,70. It tried to eliminate all the disadvantages of its predecessors, which largely succeeded - the turret was modernized, raising the angle of raising the machine guns in it to 60 degrees, which allows you to shoot at targets hiding on floors of buildings, the landing hatch, which is still on the side of the vehicle, has been increased, a new large door has been added to cover it, lessons were learned from the Afghan war and engines were replaced with the btr 60, 70 for one new one with power 290 KM. The fuel tank has been increased (do 290l), which increased the operating range to 600km. The basic version is armed with two machine guns: large-caliber KPWT cal. 14,5mm (500pcs) and the PKT caliber 7.62mm (mosin)(2000you pcs) Unfortunately, after the first defeat in the Chechen war, Russians ,,they went to their minds ", by adapting some versions of the carriers to the BTR 80a version - armed with a gun cal. 30mm (2a72 gun model), and a particularly dangerous version of NONA, adapted for mortar firing cal. 120mm.Transporter może przewozić drużynę 10-12 soldiers placed in the landing compartment, in the center of the vehicle. The crew consists of two people - a mechanic driver, and a commander who is also a deck shooter.

The transporter is susceptible to fire with anti-tank rifle ammunition, with grenade launchers, IEDs, even of low power, and throwing fire bottles. The Russians continue to drive unhidden inside the vehicle, just, among others. due ,,metal coffin "- inability to dynamically lower the vehicle, in Chechnya, this often resulted in the landing of the landing, when BTR is within the range of mine traps - videos from ,,flying soldatami ”are widely available on the Internet - you can get acquainted with them. However, you don't need any firearms to fight the Beteers - all you need is a well-masked anti-tank trench, more than two meters wide., a transporter that gets stuck in it is useless - the vehicle cannot move away. A road accident is also effective (barricade) about the height of the walls above 1,5 m and a suitable reinforced structure. The BTR is a floating machine (at least theoretically - there is a known case of the sinking of the BTR 60 podczas próby forsowania Wisły w Warszawie przez milicyjnych komandosów ,,Misztalowców ”of the Security Department of WUSW.

The technical data of the vehicle are:

It follows from the above, that transporters are easy targets for teams ,,tank destroyers ", niewłaściwa wydaje mi się też rosyjska doktryna ,,riding a horse ”- it's easy to shoot at them, good PKM sights, and snipers shouldn't have any problems with that.