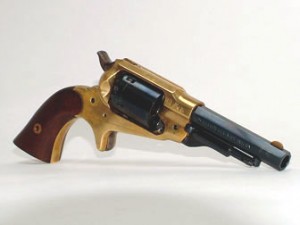 In the second half of the 19th century, the E. Remington & Sons saw the potential of the small pocket revolvers that civilians liked. It is mainly thanks to their dimensions that Samuel Colt's pockets gained such fame despite many disadvantages to larger "relatives". So why was Remington to stop at the production of large-sized revolvers with barrels? 8 i 7,5″? There was a New Army Sheriff with a barrel 5.5 ″, but he wasn't strictly pocket either.

It's easy to guess, that the result of this "enlightenment" was the Remington M1863 Pocket revolver in the caliber 0,31 cala.

This weapon had a barrel length of 3.5 ″, więc o pół cala krótszą niż „maluch” Colta – model 1849. The safety pins known from the New Army revolver were decisive for the possibility of safe carrying the weapon with all five chambers loaded, the structure of the frame allows for a fairly quick replacement of the drums, as in New Army. If it were not for the abandonment of the classic trigger guard, it would actually be just a miniature of the large M1858.

Some do, that the removal of the bail affects the convenience of handling such a small weapon, inside, that its aesthetic values ​​therefore increase.

I personally think, that this is not a bad solution, the trigger is retracted until the tap is tightened, so it is not threatened with mechanical damage, drawing such a small weapon can therefore be faster and more convenient, like in winter - wearing gloves. (does not change the fact, that it is still quite a challenge) A barrel shorter by half an inch than in the Colt Pocket certainly does not result in better accuracy, while probably at the standard distances of the "game table" it was still sufficient, and that's half an inch - not much, has a positive effect on the faster drawing of such weapons, of course it's even easier to hide it. Manufacturers of replicas of this model recommend calibrated bullets .321, and approx. 10 black powder grains with granulation FFFg, often, however, as in the case of many black powder guns, we have to choose the dose of gunpowder individually for our weapon, many people also use the finer powder with good results, however, probably everyone will agree, that there is no reason to load "as much as you can" into the barrel of a revolver with such a short barrel - most of the gunpowder will burn after leaving the barrel. It is not a target shooting weapon, also the energy of the projectile fired from it is moderate. If someone is complaining about small / short, or Remington's clunky, in his opinion 1858, and you should be aware of buying a pocket, że kieszonkowe rewolwery są KIESZONKOWE, so it is worth remembering that the minimization killed in this model all the advantages of large revolvers.

This is why I am writing this, that not everyone is aware of it, that its potential acquisition will be suitable only for recreation. In the nineteenth century, the purchase of such weapons made some sense, because it was used for defense, or as an additional support weapon - at the distance of a few, up to several meters. Today, where black powder shooting is carried out in sterile conditions of the shooting range, and shooters evaluate their acquisitions most often in terms of accuracy by training over long distances, 19th-century pocket weapons are a recreation for them without any pressure on results, and an interesting addition to the collection.