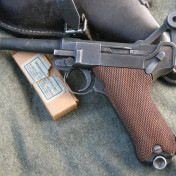 The ancients used to say, "You want peace? Get ready for war ". In this paradox already as contemporaries, over the years, or in fact, over the centuries - we discovered the real principle governing the military balance in the world. Although it is difficult to find any aspirations for peace in the German military operations, the name of the P08 pistol was given according to that old Latin proverb.

The beginning of the 20th century turned out to be the beginning of semi-automatic pistols. German constructor Georg Luger, inspired by the large and "raw" design of one of the first C93 Borchardt semi-automatic pistols produced in series production, created the 9mm Parabellum automatic pistol, which we also know as the Luger pistol, or just Luger. W 1908 year, this weapon began to displace the Reichsrevolver 1879, thus entering the armament of the German army, as a regular handgun. What weapon was the P08 pistol? Customs, convenient to use and reliable. On the other hand, there are some disadvantages that need to be mentioned, of which susceptibility to contamination appears to be the most difficult. In each Luger model, the parts were adjusted individually, for this reason, a few digits were punched from the serial number of a particular unit on the essential elements. Complicated, accurately fitted gun mechanism, consisting of many parts, it was not ready for difficult operations, and basically the "dirty" conditions of the battlefield. The Germans did not look for a solution to the problem in improving the structure, they stated, that they will equip their soldiers with new ones, to protect the pistol from contamination of the holster. The idea was fine, as long as the gun was actually carried in a holster and it did not become contaminated after taking it out of it ...

Of course, the weapon did not stop working from a bit of dust or after falling onto the lawn, we are talking about more serious pollutants, such as mud, sand, or the combination of the two with dust, carbon deposits and basically anything that could disable this precise mechanism. Although in 1908 year Lugers began to systematically displace revolvers 1879 (in my subjective opinion, cheesy bogeymen), they did not completely supersede them until the years of the Second World War, where even P08 in 1942 years were already replaced, or actually more densely "supplemented" by simpler and more modern Walther P-38. It is mentioned, that for years 40 Reichsrevolvers were used by administrative employees of the Third Reich.

A characteristic feature of the Parabellum is its appearance compared to other pistols. Even if someone only knows a few models of pistols from the first half of the 20th century, that would most likely point out Luger without any problem. "Knee" lock, which is unlocked by breaking the lock lever upwards, it is like in C93 - a borrowing from Maxim's CKM. Impact mechanism without hammer - beater, z własną sprężyną uderzeniową w zamku to niespotykane wtedy rozwiązanie. When we look at the first successful semi-automatic pistol developed at the Mauser factory - the C96, we have a good impression, that we see two different worlds.

What would not be boring and to go beyond the most famous characteristic of the standard P08 pattern, I will mention at this point, that German engineers worked on the development of these weapons, as a result, we can read about many modifications of the gun itself, as well as more "peripheral" accessories related to it. Please see the gallery below, containing scans from the richly illustrated publication "Pistolety" by the Olesiejuk publishing house. There you can read about among others: additional stocks - holsters, long barrel versions, with a butt and a bed made of wood, ornate Lugers for contemporary dignitaries such as Marshal Göring, but also more ingenious "adaptations" of Parabellum, such as rimfire conversion inserts, drum magazine containing 32 bullets, or the compact "Baby Luger" - Georg Luger's personal weapon.

The image of Luger, perceived through the prism of the events in which he participated, he did, that he became an inseparable element of the image of a German officer and to a large extent a symbol of the totalitarian regime, whose dignitaries he had to serve. Interesting piece of history and a must-have for the collection of the German handgun enthusiast of that period.