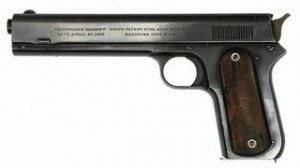 Thinking about John Moses Browning, the image of the Colt M1911 - the well-known forty-five, which is his most famous and perhaps the most successful work.

He dealt with various weapons - short ones, long, machine, self-repeating, had many ideas, and one of them has resulted in today's article describing and summarizing the history of the model 1900 - one of the predecessors of the Colt M1911.

Browning began working on the design of semi-automatic and automatic weapons in the years 90 XIX century. When the CKM Colt Model entered production 1895 focused more on developing the design of small arms. W 1895 year tested the first gun, which operated on the principle of removal of gunpowder gases, the construction was not particularly successful, a year later, however, Browning began testing a new prototype based on the short recoil principle.

The prototype was presented to a representative of the Colt company, who bought the license for this gun.

General Daniel W.. Flagler, the head of the US Army's Armament Service, agreed to the trial by the army, requested by Colt.

The trial committee found the Browning design promising and innovative, but still in need of refinement. At that time, the search for a replacement for the M1892 revolver continued (Colt New Army DA). W 1899 another series of tests began in the year. Apart from revolvers, the Mauser C / 96 pistols were also tested, Mannlicher M1894 and an improved Colt M1898 prototype. The Colt M1898 was recognized as the best design, but the military demanded that life tests be carried out.

19 February 1900 the first endurance tests took place in the year ? they have been delayed for so long, because access to ammunition .38 ACP, which was produced in a small amount was difficult, the first test was a launch 900 cartridges in series after 50, with a cooling break after each series.

The next tests were carried out 22 brand.

When donating more 900 of shots, the axis of the rear connector connecting the barrel with the frame was broken and the barrel was damaged.

Repairs were made and testing continued.

When more were fired 558 missiles again broke the axle of the rear link, and then the front axle. One gun was given 5800 shots, and the commission's report assumed, that the gun would probably last twice as long.

The simple and reliable design was appreciated, not very susceptible to external factors such as atmospheric factors, kurz, mud and the like. The undoubted advantage was easy operation and a decent rate of fire. The Colt M1900 was a semi-automatic weapon.

The principle of operation is based on the short recoil of the barrel.

The lock is bolted with three bolts, unlocking by lowering the barrel. He fired a cartridge .38 ACP.

Trigger mechanism without self-tensioning with hammer cocking mechanism. External tap. An interesting solution played the role of the fuse, namely the base of the bow tie, which blocked the firing pin when lowered (the last ones did not have any fuse). In order to secure the pistol, it was necessary to pull the hammer off and depress the bow tie ? then it was possible to lower the tap. The Colt M1900 was powered by a removable one, single-row box magazine with a capacity 7 cartridges, placed in the grip. Magazine catch at the bottom of the grip.

Now, maybe a small summary of what this actually is 1900 it is - this is the genesis of semi-automatic handguns, without which we would not be able to enjoy the next models of Browning pistols. He is far from perfect, but at the beginning of the 20th century it was an innovation.