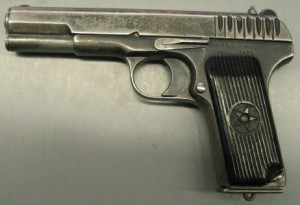 Probably each of us knows the epic Nagant revolver.

Dość brzydki (however, tastes are not discussed), medium size, basically nothing special. However, after the first pull of the tap, our eyes are shown quite a sophisticated mechanism of this weapon.
Then one glance at the cosmic, even more so for those times, ammunition and now we have a full picture of the operation of the only gas-tight revolver, which was really successful and was really mass-produced (including a considerable party in Poland). The revolver was very popular, performed well, but its complicated mechanism (not really increasing the projectile's energy in a worthwhile degree) and the non-protruding drum made, that it was a weapon that was a bit complicated to manufacture. At the same time, it was time consuming to load and unload for soldiers, over whose heads were fired bullets fired from the enemy's weapon - weapons with replaceable magazines, even with P08.
The Soviet Army started at full steam in the 1920s, work on a more practical weapon than a revolver slowly coming out of military fashion. The result of these works was one of the most famous semi-automatic pistols in our region - TT33 - Tulski Tokarev, or the popular "Tetetka".

The weapon was designed by Fyodor Tokarev's team, famous designer of weapons. The first prototype was ready in 1930 year (TT30), final version in 1933 (TT33). I will not go into the details of the story here, because you can check them in any online encyclopedia. I prefer to talk about the design as well as the advantages and disadvantages of weapons in the opinion of me and my fellow instructors, athletes, collectors. I also want to make a financial point.

Briefly about the structure: very well visible the first time the zipper is pulled back, even for people who are not very knowledgeable, system based on short barrel recoil, locking by skewing in the vertical plane. The gun has no cocking itself, the tap is external. And here is the first drawback. The weapon has a rather specific hammer mechanism, which can be easily detached from the frame, as for me, downright irritatingly straight. The system is slightly seated, and in itself, when you pick it up, it resembles a construction taken from a kiosk lighter. It clearly works, but… disassembling it and possibly repairing it requires watchmaking precision. Cleaning in the field is therefore virtually impossible. Maybe the constructor assumed, thanks to this, that it can be easily removed, it can be changed into another in a minute, but a Red Army soldier probably rarely carried a spare hammer mechanism with him. What was the point of something like that against Luger?, which can work even with a broken trigger spring?
The unfolding of the weapon is there, I admit, pretty quick. The only irritating step in it is taking something out, co similarly F.B.. (Of course, the TTs were also produced in Poland and many other countries) officially stated, as "lock latch spring", I prefer to call it a strong paperclip. Primitive element to the pain, but it wouldn't matter, if not for the fact, that nowadays a large proportion of TT, the early ones, of course, are collectors who care about their exhibits and maintain their value. Our "latch spring" does not help. Theoretically, the constructor probably expected, that the user removes it with the help of the lower part of the magazine (denka). In practice, it is possible, however, with little practice, it results in scratching a significant one
skeleton parts, therefore, it is worth placing some material on the element exposed to scratches.
After removing our paperclip, we quickly pull out the latch, and then in a fraction of a second we can disassemble the cleaning gun. I recommend that you focus when removing the return spring, because contrary to appearances, missiles aren't the only things, which can fire from the pistol. Meeting the eye with the perch would not be the most pleasant, but that's the charm, especially, pistoletów ze sprężyną umieszczoną pod lufą. Po paru sekundach mamy w ręku lufę, lock, latch, "Spring", the aforementioned hammer mechanism and barrel bearing. Further disassembly of the gun (e.g.. hammer mechanism) is, as already mentioned, difficult and simply- is not recommended.

The pistol is considered a handy and relatively light weapon. But is it really so? When loaded, it weighs almost a kilogram, however, it is important to remember, that it is a typical battlefield weapon, it is not a "pocket" PPK etc..

The weapon is adapted to 7.62x25mm ammunition (so, so- similarity to 7,63 The Mauser is NOT random and the cartridges are interchangeable). It fits in the magazine 8 pieces plus possibly one in the chamber, but it is not recommended. About that later.
We are dealing with a missile, which takes off at a speed of about 420m / s, achieves energy comparable to missiles fired from Glock 17. It can fly over many obstacles, which basically makes no sense in a pistol, who served the soldiers on the battlefield and preferred them, to give all his energy to the target. Basically, the cartridges for the TT and the Tetetka itself are considered "strong". Strong ammunition and primitive construction result in a fairly large "kick" here. Personally, I love to shoot the TT, but the recoil is not good for locating the projectile in the target. As you know, it makes it difficult to assemble for the next shot and the overall one drops, practical accuracy of the weapon. But the questionable accuracy of the TT is not only due to the recoil, which spoils the other, third shot etc.. It is a fact, that it is not just a precision weapon. And the soldiers of the Red Army said the same thing. So they got exceptionally "accurate" Makarovs.
Another disadvantage is this, that it is relatively easy to depress the magazine latch button with the normal grip of the pistol. Pretty bad for a soldier on the battlefield, but that's the charm of many guns. Since we're at the warehouse, it is worth adding, that the TT closes the lock holding on the latch in the extreme, rear position
if we vigorously insert the magazine into the handle. Of course, the cartridge will also be inserted into the chamber. Inserting an empty magazine - the slide will not release.

But finally we came to the disadvantage of the TT, which in my eyes describes it as a weapon used by the police and the army (and this is what it was used for for many years also in Poland), and generally usable by anyone except the athlete, collector and instructor. The biggest disadvantage of the TT33 is the fact, that ... there is actually no fuse.
Theoretically, it says, that the hammer can be pulled halfway on the "safety tooth", but that's one big mistake. Basically, the only safe way for an officer to use Tetetka was to carry it with the chamber empty and the magazine removed.. Best of all, is not to wear it at all and replace it with a P-64, for example, when they were available. Some of the Tetetek imported to the USA were equipped with an external fuse, to meet certain standards imposed by local law. It doesn't look pretty (there are many photos on the Internet) but it greatly increases security. Weird, that the plants in Tula did not see such an opportunity.

There are very few WWII pistols. , which dealerships offer in good condition at such attractive prices. I saw a pre-war Tetetka for less than PLN 400 in really not the worst condition. I think, that someone seemed to want to sell it quickly, but still - it proves it, that the prices are not the highest. In the USA, the TT, especially during the war and pre-war period,
but also later: Polish and more: are reaching cosmic prices compared to ours. My friends - collectors from the United States, fortress, that you can meet them even after 700 dollars and this is not something surprising. This may be because of the fact, that the Russian originals are no longer imported into the US, and most of these, that have arrived: were modified and lost their value by adding the previously mentioned external fuse in the area of ​​the bolt catch. The intact ones are therefore relatively expensive.

We can get Polish TTs in our country at very attractive prices. I have even heard about cases where the commission sold a dozen or so copies in a package, where the price of one was PLN 80, and the gun was in really good shape!

Americans praise Tetetka. Some collectors compare them to VIS, and despite my great sympathy for TT- I consider it a great exaggeration. Każdy z moich znajomych w USA posiadających TT twierdzi, that their copies have never jammed yet. I have shot in my life with 3 various Tetettes, one military and one Polish in great condition plus
one also Polish in rather poor condition. All 3 jammed when ejecting casings. The lock wedged it between the cartridge chamber and the lock that was already closing. Maybe I was just unlucky.

summarizing- TT to legend. A legend at a reasonable price. Perfect as a beginning for people who have a permit for collectors. For others - I think it's a waste of space in the book. But these are your books, so please fill as desired.