There are many types of maps available for different purposes. Choosing the right one is of great importance for the planned trip. Often, several maps should be taken, among which there should be one with a small pitch (scale), showing the entire hiking area, and a few more, individual areas. It is best to use graduated topographic maps for hiking trips 1:50000. Instead of a cartographic grid with marked meridians and parallels, such maps use a rectangular topographic grid., the lines of which are usually placed every two centimeters and intersect at right angles; the distance between them corresponds to one kilometer in the field (kilometer grid). Each point of the topographic grid can be defined by conventionally accepted coordinates (letters or numbers). 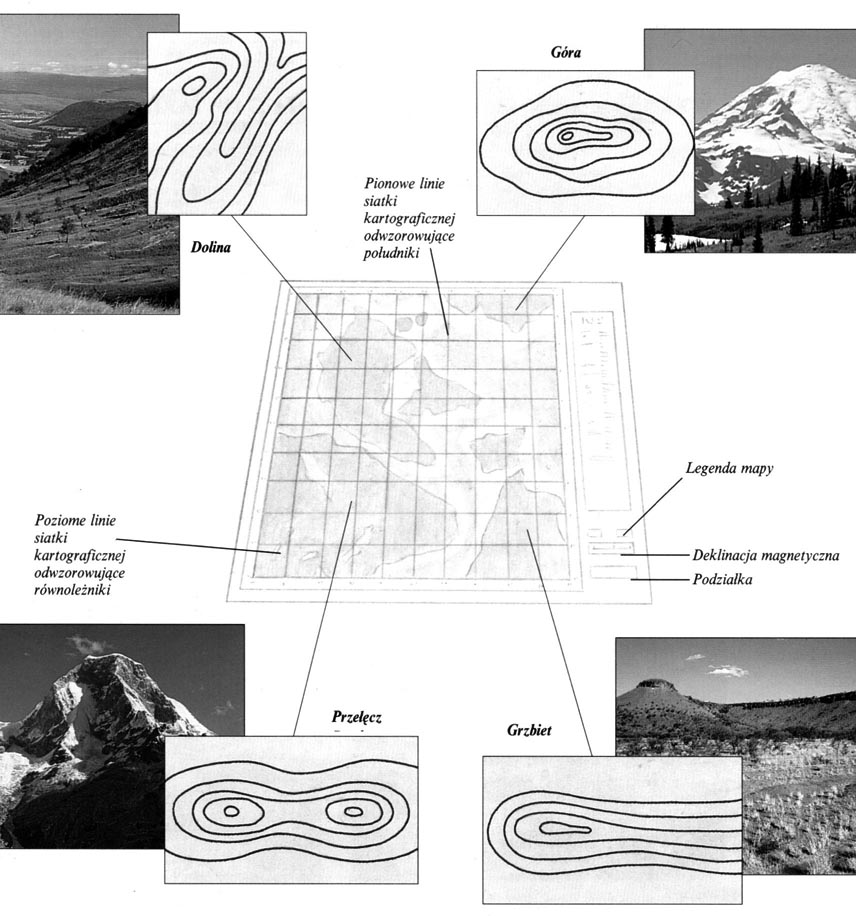 The relief is usually the result of the erosive activity of water, which while flowing, they carve the valleys and ravines separated by hills and mountain ridges. Landscape elements related to human activity, such as road, are impermanent, they change frequently. Therefore, to determine the location of the area on the basis of the map, one should start with identifying the rivers, then the valleys and the hills separating them.

Valley – Lines connecting points of the same height, that is, the contours show the valley as an expanding tongue formed by their elongated bulges. Thanks to them, you can read what the valley looks like from the map, especially those parts of it, which are invisible at the exit. The numbers along the contours indicate the height above sea level.

Pass – The pass is a depression in the mountain ridge separating the adjacent peaks. It can have the shape of a wide saddle or a narrow gap. When standing at the foot of the mountain, we often do not see the mountain pass, because one peak obscures the other. On the map, the pass can be recognized by the two circles made of contour lines (tops) connected by a curve, closed line.

Ridge – Rivers and valleys usually fence off mountain ridges. On the map, the contours that mark them form an elongated drawing. The bubble level enclosed in an oval marks the climax of the ridge. It is often easier to walk along the ridge than the valley, especially in the area covered with dense jungle.

top – We can read from the map, how the whole mountain is formed, also its slopes invisible to us from the spot, where we are. Their inclination and shape are evidenced by the course of the contour lines and their distance in relation to each other. The contour lines run like this, as if they were painted on the slopes of the mountain.