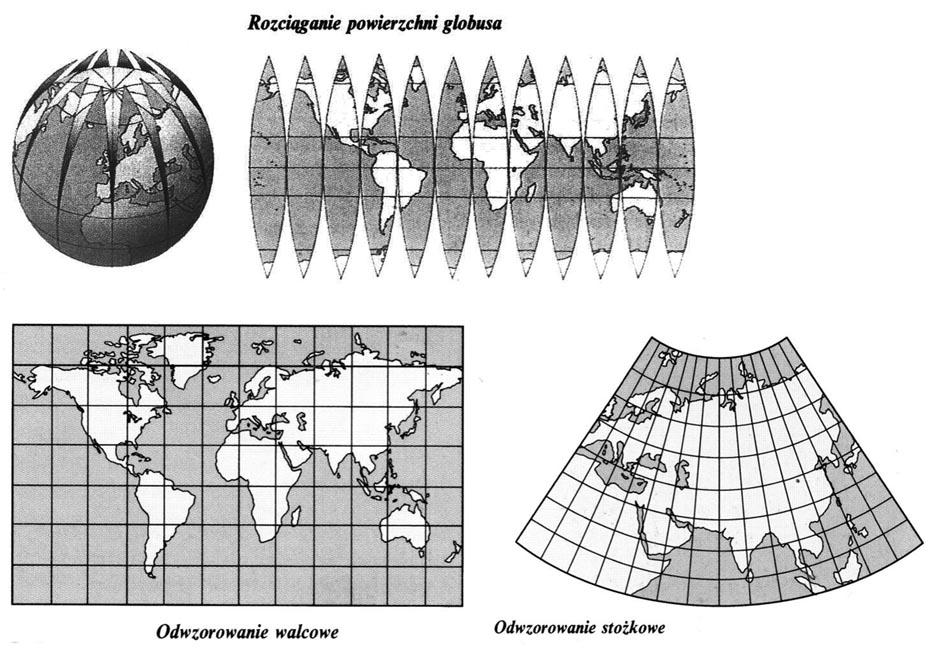 The map is to present the selected section of the convex surface of the Earth as accurately as possible on the plane. Each projection of the globe onto a flat surface of a cylinder or cone must, in one way or another, distort the image of the Earth. Therefore, maps never accurately reflect all the features of a given area. This is especially true of greater latitudes. One of the best known cartographic projections is the Mercator projection, commonly used in drawing nautical charts.

Stretching the globe surface – If the surface of the globe was cut along the meridians and stretched flat, there are wide gaps between the pieces near the poles. It is just a necessity ,,filling ”these gaps on flat maps distorts the image of the Earth.

Cylindrical mapping – One type of cylindrical projection is the Mercator mesh. In this projection, the surface of the globe is projected onto a cylinder adjacent to the sphere along the equator. After expanding it, we get a flat map. This is a faithful projection, which maintains right angles between meridians and parallels. However, the Mercator projection does not accurately reflect the surface. As you move away from the equator, the distances between the parallels increase, which deforms the size of the surface, especially high latitude areas (peripolar).

Conic mapping – There are many ways to project the globe onto surfaces with different properties, pros and cons. The above map was created by projecting the globe onto a cone tangent to the sphere. Cone mapping is often used to plot maps of different parts of the world placed in atlases. Deformations also occur when projecting onto a cone, increasing as you approach the base of the cone; they are not that great, as with many other representations.