Good arrangement and quick lighting of the fire depends on the accumulation of dry fuel and gradual filling – starting with tiny sticks, and ending with thick logs. Consider the place, in which you will arrange the fire and its type, keeping in mind safety first and foremost.
Fire in the open is always a potential hazard. It can also use up all the oxygen in the enclosed shelter in the combustion process, which may cause suffocation for people there. Badly located, and after collapsing the camp, an unfinished fire can also spoil many beautiful nooks and crannies.

Do not make a fire in places affected by drought. Don't make a fire that is too big, so that you can always control the fire, especially in windy weather. Never kindle a fire under low-hanging tree limbs, for they can catch up with sparks and flames shooting upwards. 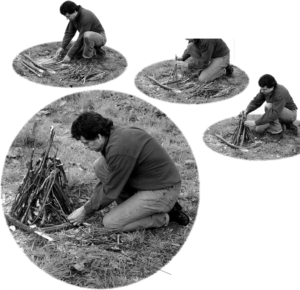 1 Cut a square piece of turf and set it aside. Line the exposed soil with sticks.

2 Place the skeleton of the pyramid from the four sticks inclined at an angle and leaning against each other. At first, the pyramid may be small.

3 Gradually add sticks, evenly on each side of the pyramid. Do your best, that it is as stable as possible. Leave some space in the center of the pyramid for tinder; do not cover one side with sticks, so that you can make a fire.

4 After arranging the sticks pyramid, put tinder inside. Set a fire. When tinder starts to smolder, sprinkle it with dry leaves, hay or twigs. After some time, the entire pyramid will burn. Gradually the sticks will burn, and the whole structure will collapse. A pile of heat will remain from the pyramid, to which you can add thicker fuel to rekindle the flames. You can also use embers for baking or slow cooking. If the temperature is high enough, the sticks placed on the ground will also burn, so that the heat will be more.