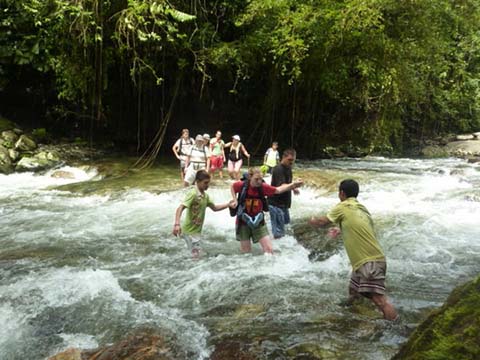 Rivers and streams are always dangerous at their source and upstream, when they are rushing and foamy streams, and near the mouth, downstream, where great masses of water roll lazily creating backwaters. Even if the river seems safe – the current is weak, and the water shallow, hidden dangers may be encountered. You can't see everything in the most transparent water, what lies beneath its surface. It is easier to cross the river in its upper course than in the lower one, for it is deep there. However, you have to watch out for the rushing current. It is generally accepted, that the slow flowing rivers are deep, a fast flowing – shallow, but treacherous whirlpools are more common in them, washed out banks and invisible obstacles. Never swim or ford across the river, if you can cross it with a dry leg.

It is best to cross the river on the spot, where the bridge stands, footbridge or a ferry waiting. Therefore, before you enter the water, do some research up and down the river. Even if he isn't near the bridge, maybe you can find a place, in which the river bed will be safe, and therefore the ford easier. note, the opposite bank is not too steep.

Treacherous rivers
In general, it is impossible to determine the depth of the river, without entering it. Underwater obstacles are usually invisible from the shore. It is also difficult to determine when standing on land, how strong is the current.

Protruding stones
It is easy to slide down from the boulders half submerged in the water, and the rivers are often deeper in such places.

Breakthrough of the river
It is safer to cross the river between bends than behind or in front of it, where the current is usually faster.

Hidden stones
Stones lying on the bottom, that do not protrude above the water surface, they create turbulence. The breaking waves indicate the direction of the water current.

Settlements
You have to avoid marshy shores and places, where the sediments accumulate – vegetation, fallen branches, because you can get stuck in them, and even be pulled under water.

Undercut edge
A high or undercut bank makes it difficult to get out of the river.

Standing waves
Visible on the surface, they can be caused by a very strong current or the breaking of water by stones lying on the bottom.

Sandy shuffle
When crossing the river, you can go to the sandbanks. However, you have to remember, that the current on the other side of it might be stronger.