Construction of a raft.

■ The raft deck can be made of thick bamboo stalks instead of tree trunks. It must consist of two layers, because one will not provide enough buoyancy. Instead of construction beams above and below the deck, you can cut holes in the walls of the bamboo stalks and thread a string through them, tying the deck together. You can also tie each stem to its neighbors for extra reinforcement.

■ Before launching the raft it is difficult to predict, how it will float on the water. When using certain types of wood, the loaded raft may sink slightly below the surface. As long as it floats, suitable for use.

■ Rafts are poorly maneuverable. When making a turn, you need to remember about it and deflect the rudder in advance.

■ The raft must not collide with banks and other obstacles, because they weaken its structure and may end up breaking the bonds.

Construction of the raft, part 2 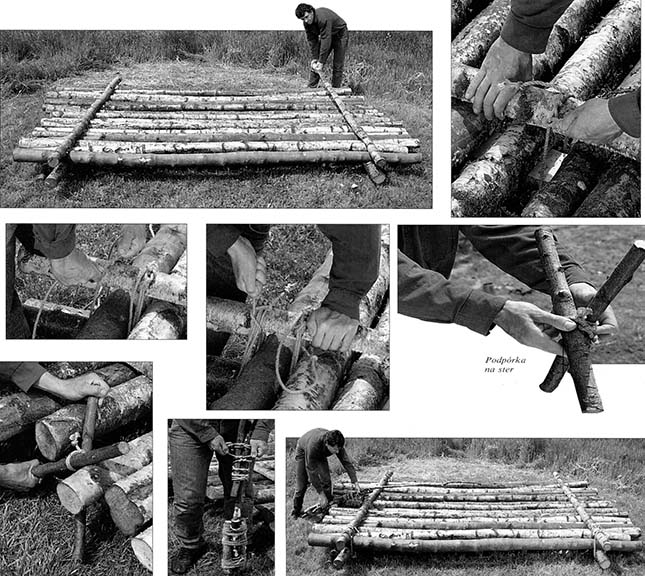 7 Place the other pair of cut construction planks across the deck, notches down, exactly above the supporting beams. Thus, at both ends of the raft, the deck will be enclosed by two beams joining the entire structure. remember, that the deck beams will be held in the water only by both pairs of structural beams.

8 Both pairs of slotted beams should be very tightly connected. The knots must be tied as tightly as possible. This will allow the deck beams to be squeezed by the lower and upper structural members at both ends of the raft. The nodes should be on the top beam, so that they can be easily checked and corrected after launching.

9 Bind the lower and upper construction planks on both sides of the raft. Make a flat knot.

10 Check it out, whether the string fits tightly around the beams and whether the knots are securely held. if you have time, you can additionally tie the construction beams in the gaps between the deck beams.

11 Tie two thick poles crosswise. They must be strong enough, to support the weight of the rudder.

12 A support leg shall be wedged between the deck beams at the rear of the raft. If it did not fit, you have to twist the poles on the knot, crossing them at a different angle. The prop to the deck is not yet attached.

13 A hand-made oar will be used as the rudder. If you want to steer while standing, you have to make yourself a long tiller by tying a stick to the steering oar.

14 Check that the rudder is correctly positioned on the support. if so, tie it to it with a string. The rudder and the support are tied to the deck beams only when they are in the water, lest they break when the raft is launched. The raft should be big enough, so that she can carry you with all your luggage. Before you load things on board, check if the raft is floating.