How to build a raft? If you need to transport a lot of equipment and food over the water obstacle, or you want to go down the river, best to build a raft – the simplest floating structure. The traditional material for the construction of the raft is tree trunks, however, it can also be made of bamboo, reeds or gasoline barrels. When building a raft, make as few cuts in the logs as possible, with which it is associated, thanks to that it will be buoyant. The raft must also be very stable. This type of water transport is useless on rivers, where there are poros and rapids. They threaten to break the raft. If possible, one should try the raft in shallow water before going deeper.

Construction of a raft 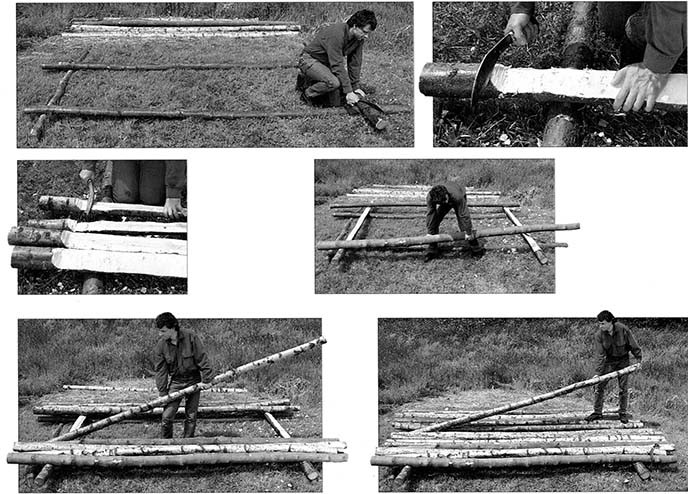 1 Need to be cut on deck 12 do 14 thick, strong trunks. They need to be leveled, to be of the same length. In addition, six more trunks need to be cut – longer Frs 30 cm from the planned width of the raft. They will be the backbone of the raft. Lay two longer logs crosswise with two shorter ones on the ground. It will be a platform to float the raft.

2 Use a large knife to make notches on all the construction planks. They are cut along their entire length, leaving after 30 cm at both ends. The notches should be half a beam deep. Be careful, so as not to cut the beam too deep, this weakens its lift.

3 Place the cut logs next to each other, check it out, that all cuts are the same length and depth. So that the deck is even, long logs should lie flat on the construction planks.

4 Arrange two beams on opposite ends of the platform, notches facing up. They will be the main support. On them, start laying long deck beams across.

5 The deck beams must be laid over the cuts, starting at both ends going to the center of the raft. Vary the thickness of the deck beams, so that they evenly load the beams, on which they rest. Turn them over when stacking, so that they lie next to each other as evenly as possible.

6 final, the center deck beam should be straight and strong and sufficiently thick, that it fits tightly on the deck between the beams. This should be taken into account, that on the water it will be necessary to correct the deck and additionally tie the beams, to stay in their places.