Much folk wisdom about weather comes from years of observation and has rational justifications, such as these, which speak of a red sunrise or an enveloped moon as an announcement of a change in weather. Apart from sky phenomena and natural phenomena, such as a rainbow, observing the behavior of animals can also help to predict the weather.

It is created as a result of sunlight passing through tiny water droplets in the air, usually during or immediately after rain. The water droplets resemble tiny prisms, they split white sunlight into its component colors. The rainbow usually portends good weather, especially if he shows up in the afternoon.

Many animals can sense air movements and changes in atmospheric pressure, which predict a change in the weather. If a storm or snowstorm is approaching, many herd animals living in the mountains go lower, into safer valleys.

The red tint of the sky at dawn means, that there is a lot of moisture in the air, because the rising sun is reflecting off the clouds. 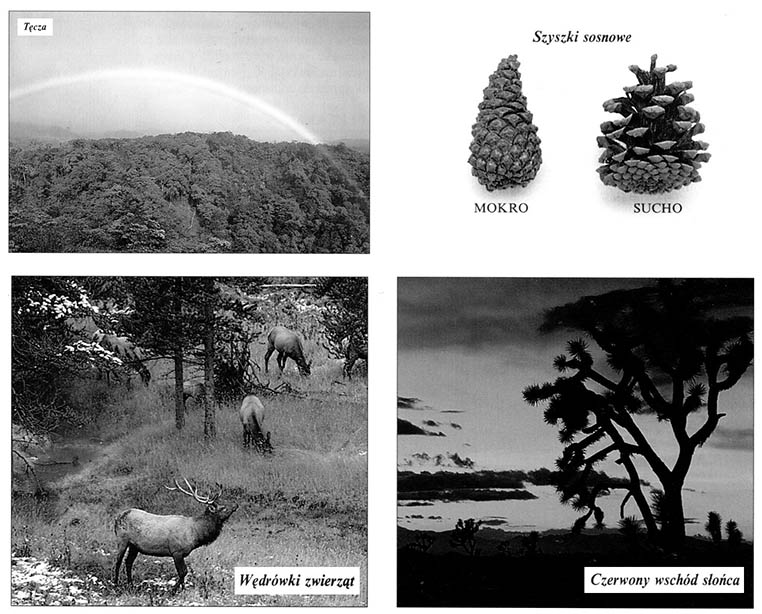 A break in the weather may herald a change in the direction and strength of the wind, or the appearance of a new kind of clouds in the sky. Prevailing winds usually produce terrain-specific weather at a certain time of the year. Dry, strong winds changing direction or weakening usually heralds a change in weather. Morning dew or fog allows you to expect steady weather, but if the wind blows and drives the fog into the hills, it may bring rain. Clear sky at dusk promises a clear night, but also cool, for there will be no clouds, that stop the heat from escaping. Before it rains, the change in atmospheric pressure causes pain in people suffering from rheumatism, makes, that the plants expand their pores, therefore they smell stronger, and causes objects made of wood to swell.

Pine cones react to moisture. If the air is dry, the scales dry out and bend. The pine cone opens. Just before precipitation falls, the scales get wet and close again, and the pine cone takes its former appearance.

Weather breakdowns usually predict changes in the direction and strength of the wind. The Beaufort scale is a comparative wind force scale. Wind strength is assessed based on the symptoms observed in the field and the state of the sea. It is conventionally divided into 12 degrees – from silence to hurricane.