Wanting to get water from the soil, a solar-heated boiler should be built. If there is a temperature difference between the two surfaces, the air will warm up and saturate with water vapor, which will condense on the cooler surface and run off.

Construction of the boiler 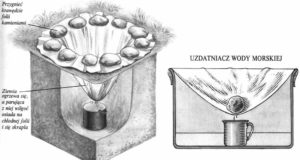 Dig a hole approx 1 m and depth 30 cm. Place the vessel on the bottom. Cover the bottom with foil, and crush its edges with stones. Weigh the center of the foil with a fist-sized stone, so that it hangs directly over the vessel. When the air below heats up under the influence of the sun, the water vapor will begin to settle and condense on the cooler surface of the film, then run down to the vessel. Such a boiler works very well in the desert both during the day, and at night. At night, the air above the pit cools down faster, thanks to which it is still warmer downstairs, so condensation may take place on the surface of the film.

Seawater or urine can be treated for drinking by the same condensation method, which is used to obtain water from the soil. Pour the seawater into a bowl, put a cup in the center of it. Stretch a piece of foil over the bowl and attach to the edges. Put a stone on it, to load the middle. The air in the bowl under the foil heats up, therefore the seawater will start to evaporate. The water vapor condenses on the foil as fresh water and flows into the cup.