Gathering plants to prepare a meal is not limited to finding different plants, which seem edible to us. You always have to find a lot of plants of one species, to be able to prepare the right portion of them, which you will eat. It is better to collect plants of only a few species, because it reduces the likelihood of accidental poison being included in the meal. When collecting plants, remember to leave some of them, so that the species can regenerate. Crumpled plants spoil very quickly, so try to collect them in a box, bag or other container. 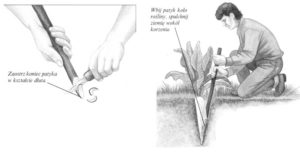 Many plants store starch in their roots, which enables them to survive the winter. In spring, the starch is turned into sugar, which nourishes the young shoots. Therefore, the autumn-harvested roots have the most value, the spring ones are sweeter. If, however, you'll be harvesting the roots in spring – watch out. Many plants have not yet sprouted shoots and leaves, so you may have trouble recognizing the species.

The roots should be prepared and boiled immediately after harvesting, lest they break. They need to be thoroughly cleaned, but do not peel, because the rind contains valuable vitamins. Cut the roots into pieces and boil them in water. Cooking removes the bitterness contained in some roots. Cook them until tender, until you can easily stick a fork into them.

Most seeds cannot be digested well, until it is ground into flour. Such a product can be added to stewed dishes, or mix with water to make a dough. You can also make flour from many nuts, as well as from roots and faded flowers.

1 Harvest the grain by tilting the ears of grass over the bag. Shake an ear of corn or crush it with your hand. Place the seeds in the sun, to dry.

2 Separate the chaff from the grain by tossing it in a container. Chaff is lighter, therefore a blast of air lifts them up from the container.

3 Grind the grains into flour between two stones. The bottom one should be large, flat, with a recess in the center. Rub evenly with the second stone, in a circular motion.