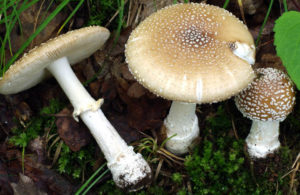 Among the toadstools there is the most dangerous fungus. However, not all poisonous mushrooms look like them. So it's safest to check the mushroom atlas and avoid these, which raise doubts.

Red fly agaric (Amanita muscaria)
It is easy to recognize; usually grows in beech and pine forests. He has a red hat, white spotted.

Muchomor sromotnikowy (Amanita phalloides)
It is the most dangerous of all toadstools. It grows in forests, most often under beech or oak trees. He has an olive green hat, bright, bulbous shaft with a large sheath at the base and white gills.

Some poisonous mushrooms resemble edible ones, which are found in other areas. For example, many mushroom species are edible mushrooms, while a yellow colored mushroom variety – yellowish mushroom (Agaricus xanthodermus) it is highly poisonous. It can be recognized by the strong smell of iodine and yellow spots appearing in the affected areas. The spring toadstool should also be mentioned among the dangerous poisonous mushrooms (Amanita phalloides verna) about a white hat, which grows best under shady trees. Several species of Cortimrius mushrooms are also deadly poisonous. 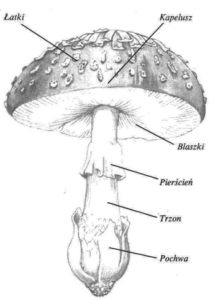 Poisonous toadstools are easy to recognize. They all have a vagina at the base of the shaft, white gills under the cap and rings around the stem.

Muchomor
This North American red toadstool is found in coniferous forests. When eaten, it causes coma and hallucinations.