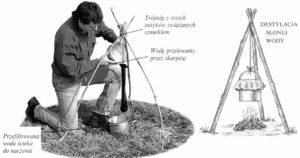 Cartridge filter
If you don't have a conditioner, you can filter the water through the sock before boiling it. Put a thin sock or a handkerchief inside a thick knitted sock and pour sand. After pouring water through such a filter, the sock should be turned up, pour out its contents and rinse. You can also put a tripod made of sticks and hang a sock on it.

When animals drink at a waterhole, they infect water with various microorganisms and parasites of the digestive tract, which can cause serious disease in humans. Some of these diseases are very chronic and dangerous, others are violent. The man in the city constantly drinks purified water, so he is not immune to this type of germs and therefore he is at risk of diseases caused by drinking contaminated water. For example, mountain s:the blushes appear perfectly clean, but it is safest to always decontaminate water from natural sources before drinking it. A lot of chemicals are going to the ground right now, in many neighborhoods, sewage is discharged directly into a stream or lake, so we can never be sure, whether the water we draw is safe to drink.

SIGNS OF POLLUTION
About that, that some source of water is not potable, not only the bones and skulls of fallen animals bear witness. If you suspect, that the water is contaminated with chemicals, look at the banks, check it out, there is no deposit of strange looking substances. You can also boil a small amount of water from such a tank, then look at the sediment in the vessel. The lack of vegetation or the abundance of green algae on the surface also indicates, that the water is not potable.

Overgrown garden
A forest of reeds testifies to stagnant water, which must be avoided.

Schistosomatoza (bilharcjoza) – A disease caused by slow-flowing flukes of the genus Schistosoma, freshwater rivers and streams. This parasite locates itself in the intestines or bladder. Świerzbienie, hives, coughing attacks, inflammation and ulceration of the bladder and other parts of the urinary tract, as well as enlargement of the liver.

Ancylostomatoza (nekatorioza) – Invasive disease caused by Ancylastoma nematodes. The parasite enters the body through drinking contaminated water. Anemia, lethargy, as well as itching and dermatitis. Symptoms of the digestive system and the nervous system may be added to this.

Disease prevention
The only sure way to avoid contamination is to decontaminate your drinking or cooking water every time. If any of the members of the expedition gets sick after drinking water, he and his guardian should be isolated from the group. They must have separate utensils, pots, cutlery. Particular attention should be paid to this, lest the plague spread through the sick man's faeces. They contain a lot of microorganisms, which caused the ailment.
At the campsite, in which cases of water poisoning occurred, hygiene rules should be tightened, to prevent the disease from spreading further.