After taking the fish out of the water, stun it, then kill by cutting the spine at the base of the head. The fish must be quickly gutted after being caught, make and eat or make preserves for later. In hot climates, even keeping the fish in the sun for a short time can spoil it, because her moist skin is an ideal breeding ground for bacteria and flies. After removing the husk, When the skin is peeled off and the bones are removed, the meat of the fish does not deteriorate as quickly. In cool climates, you can leave the killed fish for six to twelve hours, then making it is easier. Bone, The broth is cooked for the skin and scalp of the fish, as long as you made the fish immediately after being killed. Broth, just like meat, must be kept in a cool place and eaten as soon as possible.

Filleting is the removal of these parts of the fish, which break the fastest. The body of the fish absorbs harmful substances from the environment. They are most often deposited in internal organs. For example, mercury present in small amounts in the sea is stored in the liver, and eating a contaminated liver can have dire consequences, especially if you eat a lot of it. Harmful substances rarely accumulate in the muscles of the fish. 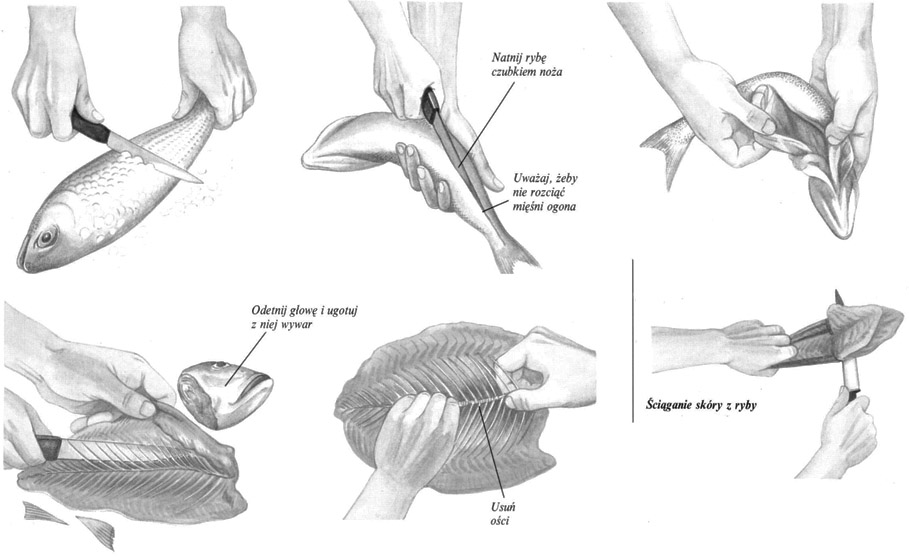 1 Many fish do not need to be skinned before cooking. However, the scales should always be removed. Scrape them off with a knife, blade away from you, starting with the tail, ending at the head.

2 Stick the tip of a sharp knife into the anus of the fish and open the belly; watch out, so as not to disturb the insides. Do not damage the tail muscles.

3 Gently remove the insides. Lay out the fish and check, if there is nothing left. Leave the roe or dandelion behind, because they are edible. Wash the fish thoroughly, on top and inside.

4 Cut off the head, tail and fin tip. Lay the fish flat and pry up the spine with the tip of the knife. Divide the fish into two halves, remove the bones. It's easier to do after cooking.

5 Use the tip of the knife to separate the upper end of the spine. Then slowly peel it off the meat.

Not all types of fish need to be skinned before cooking, especially from the little ones. Some, however, give off irritating or poisonous mucus. Other, like catfish or sharks, have very hard skin. Therefore, you should remove the skin before eating.

Fish skin removal – Separate the skin from the meat. With one hand, grasp the edge of the skin, the other one, cut off the meat by prying it with a knife.