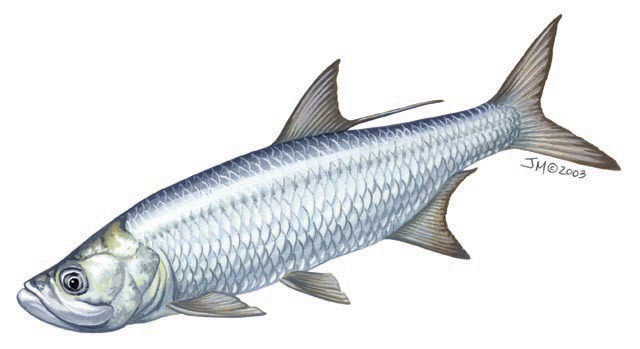 The largest sea fish inhabit the depths. Closer to the shore, in the shallows, where the sun reaches the bottom allowing vegetation to develop, there are shoals of smaller fish. Fish can travel long distances in search of food, some of them fall prey to predators on the way. Sometimes even large fish come to the coast and can be caught with a fishing rod or a net, however, they are more often found offshore. If you don't have a boat, you can also catch sea fish wading in a shallow sea or a cove, or wait for low tide and move farther from the shore.

Only a few species of fish live, which cannot be eaten. The healthiest and most rational way to eat fish is to eat it raw, because in this way fats and unstable substances are not lost. However, you can steam the fish, to stew or bake. Don't eat the skin, because it can be covered with poisonous mucus or dangerous spines.

Tarpon (Megalops)
It occurs in coves flooded by tides, mangrove swamps and lagoons, and also in shallow coastal tropical and subtropical regions. It is covered with large ones, hard scales.

Turbot (Scophthalmus maximus) .
This fish often appears on the tables. Found on the shores of Europe, especially in Scandinavia. It is caught without much difficulty, taking a little fish as bait.

Stingray (Raja)
During the day it buries itself in the sand on the Atlantic and Pacific ocean floor. He goes out at night to catch molluscs and fish. Individuals of some species grow up to 2,5 meters.

Tuna (Thunnus, Euthynnus)
It's a predatory fish, that feeds on small fish, both alive, and dead. Some species reach considerable sizes.
Tuna is found in tropical and temperate waters. It often swims in shoals close to the shore.

Herring (Clupea) it becomes rare in coastal waters of the temperate zone, however, elsewhere in the world it still provides successful catches for fishermen. Herring swim in large shoals, which often come close to the shores, where fishermen can catch them in a net or with a fishing rod. Perch (Morone) is an excellent medium-sized fish, which can be caught on a hook and line at low tide, when it forages near the shore. Other common marine fish are the various species of mullet (Muglidae) and grayling (Thymałlus).