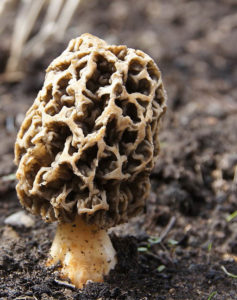 Picking mushrooms and lichens is a constant activity for people in many parts of the world. Mushrooms are very tasty food, rich in protein and minerals. No wonder then, that they are the main ingredient of many national dishes in different countries around the world. However, great care should be taken when picking and eating mushrooms. Some of them can be deadly poisonous, although in appearance they are confusingly similar to edible varieties. Even experienced mushroom pickers make fatal mistakes. Sometimes what is eatable in one country looks almost the same as a poisonous species found in another.

A branch rag (Sparassis crispa)
Autumn mushroom; occurs in coniferous forests. It grows at the base of tree trunks and on their roots. Gives off an anise smell, and it tastes like a village nut.

Purchawka (Lycoperdon perlatum)
It can be found in summer and autumn in fields and meadows. Young mushrooms taste best, about white hiking.

Orange bowl (Aleuria aurantia)
I need sun, therefore it can be found in sunny forest clearings or meadows. It grows in the fall. Suitable for eating, but it's actually tasteless.

Grifola leafy (Grifola frondosa)
Found from spring to autumn in deciduous forests. It has a typical cap mushroom smell and a sweet taste.

Fistulina hepatica
Most often it grows on oak trunks. Its red fruiting bodies are bitter when eaten raw. The most delicious braised, after soaking.

OTHER EDIBLE MUSHROOMS
Mushrooms of the genus Boletus have the typical shape of a cap mushroom and have a pillow instead of gills under the cap.. Most species of this genus are edible, it has a delicious taste. Few varieties of this kind are inedible, but they are easy to recognize by their tart taste, what they have tasted raw, and after the orange color of the stem and cushions under the hat. Pick varieties with yellow or cream colored cushions. Mushrooms, that is, mushrooms growing on tree trunks are usually eaten, though they are often very hard and tasteless. All mushrooms harvested in the forest or in the meadow should be boiled before eating, to neutralize small amounts of toxins, that often occur in them. You have to remember at the same time, that cooking poisonous mushrooms will not, that they will be fit for food.
Their species of fungi grow in different regions, that is why you need to get to know them in your own area or where you are going.

These plants often grow on rocks. They are resistant to harsh climatic conditions occurring, for example, in the Arctic or mountain regions. There are actually no poisonous lichens, but before eating, all must be soaked overnight and boiled for a long time, to strip them of harmful acids.

Reindeer moss (Cladonia rangiferina)
This plant, extremely resistant to harsh climatic conditions, is found in arctic regions. It resembles the antlers of reindeer, hence its name. Before eating, the plant should be soaked for several hours, and then cook for a long time.

Rock tripes
This nutritious lichen is found in the northern temperate countries and in the Arctic regions. Before cooking it must be soaked in water.