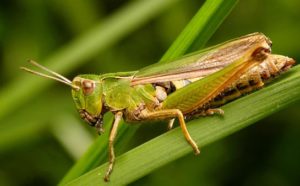 Many people can't imagine, that they could eat snails, ants or grasshoppers. There are, however, situations, where it's hard to find better food, and while waiting, you may become weak and not have the strength to look for other food.
Therefore, no potential food may be deleted in advance, no matter what he looked like. Some invertebrates, like insect larvae, they contain much more protein than plants, so it's worth collecting and eating them.

Many invertebrates are considered edible, but eating grasshoppers, for example, is not just about biting or swallowing them.
Only certain parts of their body are suitable for consumption, after cooking. Some invertebrates even need to be specially peeled and prepared. Here are some edible invertebrates.

Grasshoppers
All jumping insects have strong hind leg muscles, which can be eaten. It's best to toast them. This kills the parasites and gives the food a good flavor.

Ants
They may already sting or bite severely, you have to collect them carefully. Some honey ants store water and tasty nectar in their swollen abdomen.

Bee
Both wild bees are edible, as well as their pupae and larvae. In addition, the bees make honey, which is a great source of energy. However, you have to be very careful, as a bee sting can lead to shock, and even death.

Butterflies and moths
You can eat them, although it is not the best food, unless a lot of them are caught. Caterpillars are much easier to collect, which also give you a more abundant meal.

Snails
Earthworms, you can eat well with shell snails and snails. However, avoid any sea snails, as well as snails with bright shells, as they can be poisonous.

Starfish
They are found on drifting pieces of wood. Crabs and prawns are also edible, found in rocky coves at low tide.

Sea urchins
Some echinoderms, like Echinocyamus, you can dig out of the sand on the beach and eat. However, special care must be taken when collecting, because sea urchins are long, sharp spikes.

Insects have more nutritional value than plant food, and their great advantage is this, that they are found almost everywhere. The beetle larvae are especially succulent. The food of many tribes consists of insect larvae. Remember about the existence of water insects, as of the genus Gyrinidae, although without a proper fine-meshed mesh, they are difficult to catch. Other edible invertebrates include termites and molluscs. You shouldn't eat spiders, because many species have hair irritants, and the mouth organs contain toxins, which may be dangerous for humans.