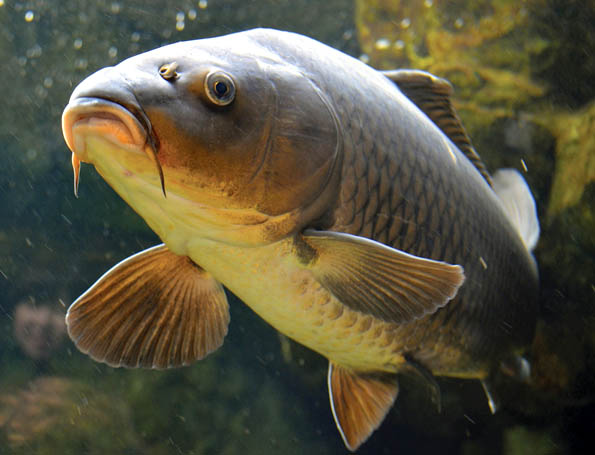 These species live in rivers, streams and lakes, as well as the mouths of rivers above the site, where fresh water turns into salt water. Many of them travel along rivers, and others, like salmon, flow into rivers from the sea, make in sweet, the peaceful streams spawn and spawn. The habits and sizes of each species of freshwater fish vary depending on the food, what they eat, but they also change with the seasons. In rivers and lakes, the depths begin far away from the shore; however, most fish prefer to live in shallow water, warmer coastal waters.

Most freshwater fish can be eaten with confidence, although some species are tastier and easier to prepare than others. Some fish have many thin bones, that make it difficult to do. Such bones are dangerous, because they stick easily in the throat. Here are some species of edible freshwater fish.

Lin (Tinca tinca)
It lives in calm waters in the lower reaches of the rivers, just before the combination of fresh and salt waters. Found in Europe, North America and Australia.

Leszc (Abramis brama)
It belongs to the carp family, the same as goldfish and carp. It feeds on the bottom of slowly flowing waters, deep rivers all over Europe and Asia. Some individuals can grow to large sizes.

Karp (Cyprinus carpio)
Popular carps grow up to approx 60 cm in length, they forage either at the bottom, or below the surface of rivers and streams. Although legend has it, that they can live for several hundred years, the opinion is more credible, that they do not exceed 40 years of life. So you can catch them without remorse, even if they were very large.

Trout (Psalm gaidneri irideus)
It is a fish closely related to salmon. He lives in cool, clean streams and in Scandinavian lakes, North America, Southeast Asia, Africa and India.

Rudd (Scardini erythophthalmus)
He lives in peaceful, lushly overgrown waters, among which it can hide well. It is found in North America, Europe and Scandinavia. This fish feeds beneath the surface of the water, only old, large specimens lie at the bottom of the reservoir.

There are many more species of edible freshwater fish, occurring especially in rivers and lakes of tropical regions. A popular species of fish found all over the world is the chub (Leuciseus) and roach (Ruther red). By watching you will see, which prefer to feed below the surface, and which at the bottom; while preparing you will learn, which are the most delicious and easy to make. If you are in doubt about the genre, bake the fish, remove the bones and skin, then cook the meat.