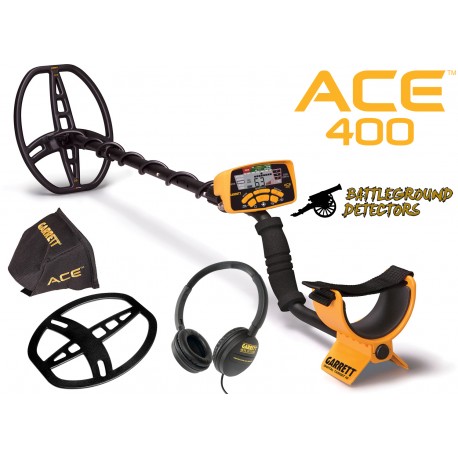 First information about the new Garrett ACE series! Is ACE 400 will conquer the market?

For several weeks there have been rumors on the web about the new Garrett ACE detectors - the successors of the legendary canaries, the dominant sector of economic detectors not only in Poland. The flagship model is to be ACE 400. The exploratory as the first website in Poland gives you details about this detector!

Garrett in response to the competition ahead of him - Minelaba with detectors from the Go-Find series and Teknetics with successful Eurotecs, had to refresh quite old "canaries". Hence, along with the ACE 400 are still going 200 i 300 and the 200i and 300i versions. It follows from the description, that the versions with the letter i are nothing more than typical Garrett detectors for the international market. No ale last night, let's move on to the presentation of the detectors.

ACE 200 will be the direct successor of the model 150. Identical arrangement of the front panel, allowing only to select one of the three operating modes and to set the sensitivity. A very important change is adding a numerical indicator - each to the five-level signal detection indicator, who remembers how defective ACE was in terms of the correct ID 150, he should be thrilled, because Garrett is catching up with the competition here and it's definitely a very good move, especially if the manufacturer manages to scale everything well. The "i" version is to be characterized by discrimination characteristics and different thresholds of sound change adapted to European conditions. How many sounds will be in the new ACE 200 it is not known, but it is unlikely that there will be a revolution and the next years are coming with the characteristic "ding-dong" in the background.

ACE 300 is a development version of the model 250 - the detector is probably the most important in the list, because it replaces the world's best-selling detector. Here we can count on a solid portion of new products - although the front panel definitely resembles its predecessor, important novelties appear - the Iron Audio option known from the higher Garrett models and the choice of operating frequency. Anyone who approached another with their canary for less than 20 meters knows, how useful this option can be in the field. Twelve Grade Discrimination with VDI (possibly scaled 0-99) with the option to manually cut out unwanted ranges. Do tego pinpoint. summarizing, ACE 250 with some fairly important improvements, albeit still without volume control, display backlight. The European version has an extended iron identification and slightly different discrimination settings. It will be a hit? As the price is right and the new products prove effective in the field, the chance is high!

The top model of the new "Aces" - 400 - has been a hot topic for weeks. Unfortunately, there is no indication of this, make this model a bridge between the ACE series and the AT. Not a word about water resistance and a great similarity to the lower model - write down the situation identical to the models 250 i 350 - identical detector with larger DD coil. The front panel does not reveal any additional elements, and even scaling the ID between the US and European versions suggests, that we are dealing with ACE here 300 with DD coil and different front panel sticker. Is it a disappointment? I honestly admit, that seeing the first leaks about ACE 400 I was betting something like this in the dark, not a curled waterproof canary.

summarizing, whether the new Garrett series is a hit or a kit? it all depends, how the new changes will affect the effectiveness of the detector. Undoubtedly, the manufacturer went in the right direction - but let's not forget about it, that the previous generation is old and a bit lagging behind the competition, and in the economic sector of the market, the battle is fierce and new players from Europe are emerging. New canaries may lose the competition, especially if the prices are not attractive. If Garrett did not solve the problems with prone to excitation in high humidity and coil hitting detector sticks, and the price of new items will not be attractive, it's a legendary name and the color may not be enough, especially for the top model, which in terms of price will probably be somewhat under much more advanced detectors - for example the native Rutus Proxima. Dodatkowym plusem nowej generacji będzie spadek ceny obecnej generacji kanarków, which stubbornly refused to go cheap in the last few years.