Who is this commando? 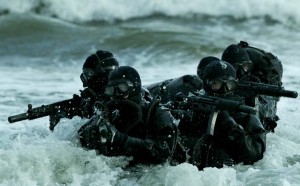 Everyone has heard of the commando troops, their spectacular actions, about the feats that are often the plot of a good action movie, or a sensational-adventure book, which you read with bated breath for one evening ,,top to bottom "- popularized by the media, the press, or the internet. Unit names, i.e.: DELTA FORCE, NEAVY SEALS, SAS, GSG9, GROM, SPECNAZ, GIGN and many more, they emphasize in themselves their value and a certain limit of the possibilities of the people serving in them. Many people know too, that the commandos operate in small groups, they do not show their faces while hiding their identity under a mask called a balaclava. They train hard, pass the courses, selections and tests, so as not to fail in the moment of trial. Some do, that commandos use a wide range of specialized equipment and weapons - they use weapons equipped with flashlights, sound silencers, various types of sights and gadgets, however, when I ask people for details, no one knows anything, the answers are laconic. The commandos are those who retake the hostages, they catch thugs, whether they are killing terrorists; everything's fine. - clearly, but I'll try to get you all this today ,,pigeonhole "professionally, specifying particular types of activities carried out by special forces, both police and military, oto one:

CT actions (counter-terrorist operations) - physical elimination of terrorists in the phase of preparing an attack or in response to an attack carried out. Carried out in most cases by military and intelligence units

AT type actions (anti-terrorist operations) - activities aimed at combating terrorists, when they are in the process of carrying out an attack - actions of this type are also carried out by police units.

Actions of the NEO type (non combat evacuation) - it is the evacuation of bystanders - civilians - from the battlefield, humanitarian mission personnel, etc., who accidentally found themselves in the zone of military operations.

HR type actions(hostages rescue) Freeing up held or kidnapped hostages - usually in their own area, such actions are carried out by police teams, military units abroad. Extremely difficult to carry out, the priority here is to avoid losses among the returned people.

Actions of the UW type (unconventional warfare) unconventional activities, e.g.. penetration into the encircled own units, creating guerrillas in territories captured by the enemy, training and support for regular army units forced to continue fighting in conspiratorial conditions, etc..

So as you can see, special units are not fibroids with a gun and a knife in their teeth like John Rambo, but professional teams to carry out the full range of activities. so scary and difficult, that the very thought of taking part in them makes every common person skin prickle and does not even want to hear about it, therefore, always respect the commandos - believe me, that they are worth it.