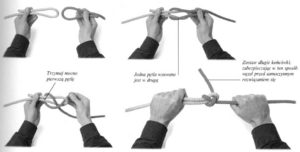 1 When connecting the ropes, appropriate knots should be used, which, when working under tension, for example, will not resolve themselves. One of these knots is the sheath. You start tying it by making loops at the ends of both ropes.

2 Then one loop is tucked into the eye of the other. This method of tying allows you to connect ropes made of different materials, of different thickness.

3 We knit the loose end of the outer loop over it and thread it through the eyelet of the inner loop. The rope must not be released, where it started.

4 Finally, the knot is tightened by pulling both ropes in opposite directions, keep the ends of the inner loop together. Leave the ends of both loops, this prevents dissolution. 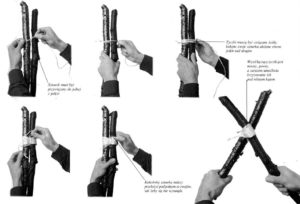 1 Cross-binding is used to connect different construction elements. The joined items should be tightly tied with string. U V First, tie a string tightly to one of the branches.

2 The first pole must be wrapped with string several times, then start tying them both.

3 Two poles should be tightly wrapped around a tightly taut string. The next turns of the string should not overlap. We wrap the poles so many times, that the string surrounds them for approx 3 cm.

4 After tying the poles, We thread the string through the gap between them and wrap k around the knot a few times.

5 We finish tying the poles by twisting the string several times through a loop made around one of the branches. Finally, pull firmly on the end of the string, tightening the knot.
6 The poles connected in this way can be crossed at any angle; they can be useful for various types of structures, such as a hut.