War equipment - what to take for war? 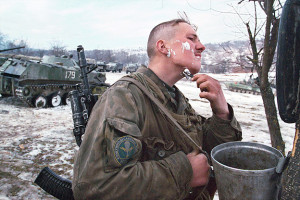 We assume, that the equipment is selected for the hostilities taking place in our country. The war has been going on for several days, we are fighting with Russia and Belarus, summer is just ending. In my opinion, we should divide the things we need into obligatory - indisputably necessary for fighting and optional - auxiliary, selected by. of your own discretion.

It is obligatory in my opinion:

– Field uniform showing nationality (probably wz93), gore-tex jacket, field cap or hat, boots (I would probably give up military models in favor of broken ones ,,tracking ")

– Ammunition: minimum 8 full magazines for long weapons and two for short weapons, after a piece of defensive / offensive grenade plus 50 stock items ,,in bulk ".

– Carrying system in the form of braces and pouches (e.g.. American Alice, German BW), or in the form of tactical vests (e.g.. Polish Lubawa,American LBV, or popular ,,Chinese ".

– High-explosive vest and combat helmet (modern, made of Mitch Kevlar, Fritz or Piorun, or an older generation steel. In my opinion, there is nothing to be picky about, in case of anything better than nothing ...)

This is optional in my opinion:

– Protective clothing and gas mask - I'm wondering if it's worth taking - as you think?

– Personal first aid kit (folia NRC, triangular scarf, dressing, powder dressing, slices, path)means of communication, gun cleaning kit, combat knife (chyba Glock 78, 81, or wz. 98), canteen (US type), MRE food ration, multi-tool, adhesive tape, a few meters of cable, plastic bag, tactical gloves, little binoculars, additional long RPK type magazine, shoulder, mini flashlight, something to write; maybe a small survival kit (BCB). Some candy if needed, thin balaclava, maybe a small backpack and a mat. That's probably all - the basic thing is not to overload yourself with too extensive individual set and take the most necessary things, so as to maintain the greatest possible mobility. But there is a lot of it anyway - you know, that these things should be placed on the so-called. ,,equipment lines, i.e.. first line – bezpośrednio w mundurze, on the lane - things needed in emergency situations, such as getting away, surwiwal, when we lose everything we have arranged on the second line, e.g.. tactical vest, ammunition, equipment, food. The third line is usually backpacks in which you carry everything you need for longer activities (sleeping bags, spare uniforms, cooking equipment, etc.). In sum: the above are just examples, that came to mind, and I personally prefer the principle of minimalism, than hanging around with spy.