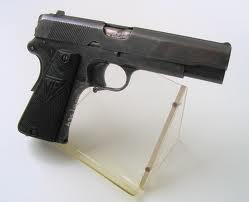 Vis was one of the best constructions of this type in its time.

A few words about Vis constructors

Professor Wilniewczyc and Skrzypiński also developed the Mors submachine gun, which, however, was only produced experimentally - in quantity 50 copies. (Which in practice meant using it in military operations by one battalion.)

Then the war broke out, which interrupted the cooperation of designers, the engineer Skrzypiński, the then director of the State Rifle Factory in Warsaw refused the German side to cooperate in the field of weapons production, He died 7 of December 1939 year.

Piotr Wilniewczyc was in the country, he was a soldier of the Home Army.

In the conspiracy, he continued to deal with the construction of weapons, developed min. silencer for the STEN submachine gun. After the war, he was a university lecturer, he continued to construct weapons, together with Stanisław Rojek, he designed the WiR wz. 57, which has never been produced in series. His last work was the RAK submachine gun wz. 1963.

The first name of the gun is "WiS", it came from the names of the designers, however, at the request of the Department of Armaments of the Republic of Poland, it was changed to Vis, from Latin. force.

The Vis pistol began to be produced serially at about the same time as the iconic FN Browning HP, a few years after the TT pistol, and approx. 24 years after the original - Colt M1911; for me it is such a distinctive structure, that I can easily distinguish it from the rest, as well as the original from which there is no shortage of borrowings.

Interestingly, a self-acting catch fuse, so characteristic of the Colt was borrowed from this Polish construction, none of the other listed designs inspired on 1911 did not uphold this "tradition".

Another mechanism in favor of Vis is the hammer release lever located on the left side of the back of the bolt, which is essentially a functional and, importantly, a safe solution. Design solutions - unlocking, locking and stopping the barrel, like her fillings, they were innovative, which resulted in their patenting. The Belgian Browning Hi Power definitely exceeds it with the magazine capacity (double-breasted 13 cartridges), but ergonomics, balance, and the accuracy of the ViS are not inferior to it at all. Fact, The fact that during the war the Germans mass-produced Visas for their own use already gives some idea of ​​the quality of this construction.

One of the best pistols during WWII - I can say it boldly.

Before the war, approx. produced at FB Radom 50 thousand copies.

Effective range (actually typical even for modern constructions, and for ammunition) to 50 m.

It makes a Pole pleasant when he sees, that, however, we have managed to produce something native that shoots and is good.

Before the war, we had Engineers with a capital "I", pity, that after the war the system pressed TTs on us, which did not grow up to our visitors' heels. It's like deliberately reverting weapons technology back to the pre-Vis production period. Successfully wz. 35 would serve us as long as our western one (present) overseas allies Colt 1911.

After the war, the gun was produced in small batches for collectors. Pity, that FB Łucznik in Radom did not support its production - there would be no shortage of customers, and it would certainly be a more sought-after commodity than their current assortment.

I would even buy Visa - a supporter of German and "Browning" constructions. There are still quite a few in good condition abroad, some were produced by the occupier during the war, without our Eagle, of course.