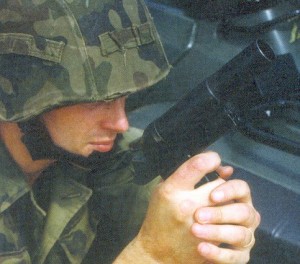 Sub-commissioner S was a typical village boy and by definition he hated those from the city. This and the mental indoctrination he has gone into ,,the Officers' Factory ”in Szczytno, that for me, a native of Warsaw, I spent my time mainly on attractions - i.e.. cleaning the worst areas (the most shitty toilets), extinguishing unburned GUNS (gas grenades) on the training ground (obviously without the mask), worth out of order; or counting stripes on a flagpole ... To też nie zdziwiło mnie wcale, when one day, standing in the vicinity of his clapper, he called me and with an ominous smirk on his face asked:

– suspecting the trick, I shyly confirmed..

I admit that at that time it was still quite difficult for me - after doing the exercise my hands were shaking .... 44 i 20 naboi kal.26 mm- the strongest ones - with parachutes ...

After this real-life introduction (now you may wonder about it, but then the times were still ,,wave ") you probably guess, that today's article will be devoted to signal pistols represented by two domestic designs, i.e.. the already mentioned wz. 44 i P78.

Both guns are designed to fire 26 mm rounds- used as standard in aluminum and cardboard casings of Polish and Czechoslovak production, contain the following loads:

– signal in white, red, green and yellow in color (star)

– the most mean for a shooter - lighting with a parachute

Pistol wz. 44 is considered to be one of the most successful constructions of this type in the world - made entirely of steel, at first glance it resembles the connection of the TT with a vacuum cleaner pipe - very solid, a massive structure with a classic layout with a broken barrel, with an open hammer and a barrel opening release located in the lower part of the trigger - the gun due to the roughness of the design ,,guarantees "enormous recoil.", sometimes very unpleasant to the skin between the thumb and forefinger - 44 magnum is also kbks ... Produced in Poland under a Soviet license since 1948 r - has received a few improvements, i.e.; an attachment for firing rescue rockets, which pull the line and the cap that allows you to shoot with the incapacitating net (WEAVE). The aforementioned pistol generally fulfilled its tasks very well, but it was not without flaws - they included, among others.

– no trigger guard - risk of an accidental shot

– a large mass of weapons

To meet these problems, Polish constructors in 1978 r developed a pistol with a plastic skeleton, which significantly reduced the weight and allowed to effectively reduce the recoil of the weapon, the trigger guard has been added - the gun has a modern silhouette. Safety was also taken care of by introducing a safety device against opening and closing the barrel with the cock on (in the form of a trigger device rod - Polish patent) This gun, under the designation P-78, entered service and successively replaces the wz - 44. Caliber and loading the same. There is one known documented, a recorded case of the combat use of the wz. 44 - during the December events on the coast of 1970 one of the soldiers of the Polish People's Army ,,straight fire ”he shot at the demonstrating compatriots