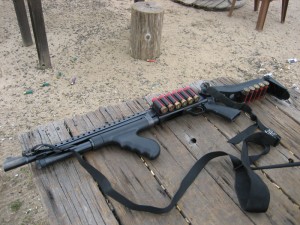 I think we all know this moment from action movies - villain - entrance with a door, in the hands of Remington's sawed-off saw 870, characteristic reloading movement and BUUMM!!! Everything within a few meters turns into tartare, a guy hit by a thick beam of pellets flies out into the abyss 10 floors together with the window frame. But is it really so?? Today I will try to introduce you to the subject of almost perfect weapons - smooth-barreled shotguns. In the course of my work, I operated on two of their models, i.e.. a short shotgun in a system without the actual SDAAS Imperator stock, made in Germany, and classic ,,pump ”- with the American Mossberg 500. Both models work flawlessly - the magazine capacity is four and five rounds. caliber 12ga (it is not the correct caliber - it is the principle of weighting) - it is practically 18.5 mm- a wide range of ammunition can be used for the above-mentioned - from the classic slug and hunting loft, through the incapacitating cartridges of the beetle type(three types of rubber slugs), tank(rubber ball), swarm(rubber loft) to special Pik type cartridges(to destroy door locks - zinc compressed missile), firecracker cartridge Grom(Flash bang equivalent), or chemical cartridges loaded with CS gas. The Combat Shotgun is the primary firepower multiplier - it is often the armament of a spear scout - in narrow passages, corridors, channels, etc.. One shot with a loft(coarse shot) you can hit multiple opponents (energy comparable to 9 for), and a direct hit by a slug shell almost always means elimination, the more effective that the lack of the barrel thread does not make the projectile rotate during the flight, and thus the missile was not stopped by ballistic shields made of Kevlar fibers. Training in the use of this type of weapon is very simple and short - after mastering a few moves, it is possible to constantly recharge the shotgun through the ejection window from the so-called ,,hand ”- the ammunition can be carried on the stock or in a pouch attached to the forearm, which means a constant reserve within the weapon. In our country, rifles are mainly used to force technical covers (hinges, door locks), or to incapacitate argesic persons (e.g.. shooting bullies at matches or demonstrations) There was also once a tragic mistake, when the policeman fired a shot at the person, mistaking the bag for a beetle (Lodz juwenalia) See effects above ... The smoothbore shotgun guarantees practical effectiveness at a distance of up to 35 meters- aiming is carried out on the barrel as there are no classic sights. The recoil, especially at the slots, is already noticeable, so you should train stable postures (Preferred Israeli semi-frontal with narrow elbows), the weapon must be pressed to ,,shooting hole "on our shoulder. Entering an action with this type of weapon also causes a powerful fear effect on the opponent (I used to want a serial arsonist, for whom we came, he gave up without a fight but this one, seeing and hearing me reload the mossberg (you can always hear it) He entered the wardrobe so effectively that, unfortunately, the piece of furniture met the apocalypse ...) I also happened to shoot locks with a bolt loaded to the emperor (this in turn requires ,,psychy ”from the operator) Despite the great knowledge on this subject, passed to me in the course of many training courses by the now legendary commando, my then commander pseud. The spider and awareness of the complete loss of projectile energy in the obstacle, somehow I could never get rid of this bothersome thought, that on the other side of the door, for example, a little girl can stand and peek at us through the keyhole. I definitely preferred then ,,knock "with a ram or a hammer (zestawy firmy blackhawk) - even with the bliss of mind, I accepted the news of the introduction of the Pics. Ammunition needs are fully satisfied by the domestic defense industry through the production of the above-mentioned plants at FAM Pionki. Short versions of the weapon can be carried under clothing, literally tied with a paracord and slung over the shoulder. The tendency should be to try to find such a rifle in every police car operating on Polish streets - the possibilities of this weapon are invaluable., which, combined with a relatively low unit purchase price and a short course of training, gives the services a serious argument in the fight against criminals. Also civilian recipients (security agencies) - should seriously consider selecting such weapons for use in defense situations, possessions or defending attacks, e.g.. for convoys with precious property.