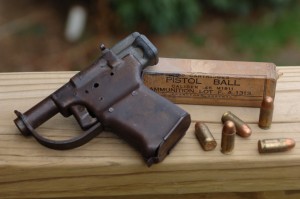 The times of the past war seem to be just a gloomy murmur of history, perhaps it is a mistake to forget. Perhaps, however, it is worth living with hope, that we will not have to live like our grandparents in the exemplary action with ,,The Time of Honor ", ,,Columbus ", ,,Channel ", whether ,,Ash and Diamond ".All these great heroes, who so often died a cruel death in the name of our freedom, prosperity and peace of mind, they all had to fight the hated occupiers - German and Soviet. Often as the war found them - without shoes, belt and uniform, and the weapon had to be called it all, what just fell into your hands. Sometimes a flintlock after his grandfather from partitions, sometimes Vis dug out of the garden, captured ,,parabelka "captured on a drunk soldier, and sometimes a two-kilo hammer, or an ordinary knife. All of these kinds ,,weapons ”soldiers of the underground army used perfectly, inflicting the greatest blow to the enemies of the motherland in the history of wars - a blow against the entire structure of the new state - underground Poland. This fact was noticed and appreciated among the ruling minds of the allied countries, for the needs of resistance movements in Poland, and also Yugoslavia, Greece, France and other countries, secret offices of secret services were established (OSS w USA, and SOE in England), involved in training, coordination of activities of individual groups, sending agents, creating special units dropped over the occupied territory - of which our Cichociemni are a telling example. An integral part of the work of these offices was the production of a whole range of specialized combat equipment, easy to hide and move, deadly and most interestingly, sometimes not in the shape of a firearm. So it was feathering, lighters, buckles, signet rings, or cigarettes, explosive suitcases, coal nuggets, or bricks, blades hidden in boots, lapels of suits, pencils, mini crossbows, garrote, daggers ... But the most intriguing of ,,the whole company ”, the design was a special single-shot pistol, produced in the USA by GLC, called Liberator - a cartridge-powered weapon 11,43 ACP, the short barrel, 100 mm long, had no thread, permanently welded to the frame made of riveted sheet metal moldings, gwarantowała śmiertelny strzał na dystansie do 5m. The high knocking power of the 45s made up for the need to fire more shots. To return them, you had to use a pencil, stick, or a similar object, remove the casing from the barrel (there was no cuticle lift claw in the construction), then from the handle which is the storage box on 10 Spare rounds of ammunition to take out another cartridge, load it, Pull back the zipper foot and fire another shot. As you can see, a long-term case, szczególnie podczas ,,robots "in the city, where every sound of a shot attracted the enemy patrols of collaborators like a magnet, Gestapo agents, or common blackmailers. So what mattered most was accuracy. You remember the famous motto of the Home Army: ,,Each missile - one German "? It fits right here. The gun weighed approx. half a kilogram, construction with a length of 140mm, initial velocity of the projectile 250m / s. Manufactured over 1 million pieces, which were scattered during airdrops over occupied territories in Europe. They were delivered in foil packages with comic instructions for use. At the moment, they are a valuable museum and hobby exhibit. A very interesting item for anyone who likes the history of the Second World War.