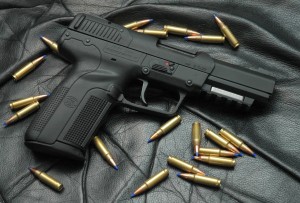 Five-seveN to Belgian pistol samopowtarzalny caliber 5,7 × 28mm produced by Fabrique Nationale plants - known primarily for classic designs such as Browning HP, and the bold ones, modern - like the P90 submachine gun, or the new FN-P.

The gun was made largely of polymer - probably the manufacturer made only metal that cannot be made of polymer. This makes the weapon very light, when unloaded, it weighs just over half a kilogram (0,63kg), loaded with only 0.75 kg. With its dimensions in combination with the weight, the Five-seveN seems to be a toy, of course, appearances are deceptive. Power from 20-round double-row magazines is provided by 5.7mm ammunition with a pointed bullet weighing 2g. This cartridge was designed specifically for the * PDW weapon development program, which was to be characterized by low weight and relatively small dimensions, but at the same time allow for effective hitting the target at a distance of up to 200m - the first * PDW by FH Hestal was the above-mentioned innovative FN P90 submachine gun developed in 1985 year. The small-caliber 5.7mm SS190 bullets primarily have better ballistic shield penetration than the typical 9mm pistol round., in addition, their speed drops slower along the flight path, and the flight trajectory is flatter. The ability to knock down a projectile is to be obtained by allegedly tumbling over after hitting the target. Why is the alleged? Because I don't know what to think about it. Missiles 5,56 × 45mm NATO was also supposed to roll over after hitting the target and thus ensure a very effective knockdown. As we know - it was different. Adam Kropiowski in his article "Why I love the Home Army" wrote: „Emka (AR-15 carbines // note. Arthur) ma też złą historię – pamiętamy Wietnam i opowieści GI’s o tym jak porzucali „swój szajs” na rzecz chińskich type-56, taken prisoners of the VC. I think, that at least some of the stories are true.” Z braku pewnych danych zmuszony jestem refleksje pozostawić Czytelnikom. But I suppose, that "classic construction" pistol ammunition (especially with a special missile) has a better refuting ability. 5,7 it is a good solution for military users who struggle with various "obstacles" covering the target. Good accuracy, even at 200m, may be an advantage, but is it possible to use it in practice - in the case of handguns? Low recoil allows you to quickly flood the enemy with projectiles, but it's good for military use again ... In civil self-defense, you shoot "only as much as you need", the scheme of the "great snipe for the body and one policyholder for the head" to put it mildly - is not welcome. Emptying the 20-round magazine with the barrel pointing at the attacker is also not a self-defense measure. Skipping that fact, that we will not register these weapons for personal protection, because we can only register weapons in the caliber range from 6 do 12mm (wg. the amended Act on BiA) these are probably the most important advantages of this design in civil defense shooting (maybe apart from the weight and the slight recoil) would remain unused. Five-seveN looks rather clunky, his grip is quite specific and probably not everyone would like it. The weapon was designed rather for an outer holster, than for covert carrying. Na koniec trochę grafiki i danych technicznych Five-seveN’a, which I have not replaced before:

It works on the principle of recoil of a semi-free lock with delayed opening.