Pepper spray as a weapon for self-defense. 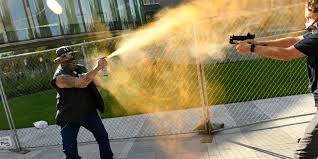 More than half of us (that is, every second Pole) participated directly or indirectly (as a spectator) in a life or health threatening situation. No wonder then, that every year the number of people equipping themselves with weapons for self-defense is increasing. However, Poland, it's not the United States of America, where access to weapons is common and legal. In our country, the possession and purchase of firearms requires a special permit. Therefore, the most frequently chosen tool for self-defense by Poles is pepper spray. So what should we know about him? What is it and how does pepper spray work?

What is pepper spray?
Pepper spray is a mixture of irritating substances of plant origin, which are placed under pressure in a special container or cartridge, in the case of pepper spray in the gun. The main ingredient in pepper spray is capsaicin (Oleoresin Capsicum) - an alkaloid found in plants of the genus Capsicum (The peppercorn).

How pepper spray works?
Active ingredients of pepper spray, such as the above-mentioned capsaicin are highly irritating in contact with the skin, eyes and mucous membranes of the respiratory tract. They cause a strong and persistent burning sensation, redness and watery eyes. They also cause difficulty breathing and catching breath. However, they do not cause permanent health damage. As a result, the attacker becomes blackened and confused, which gives the victim time to escape or call for help. Interestingly, pepper spray works the same regardless of the pain threshold of the opponent. Thanks to this, it is also effective against people who are under the influence of alcohol or other intoxicants.