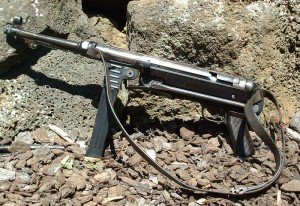 Row production 1 million copies, cartridge 9 x 19 mm Parabellum, 4 kilograms of properly welded steel and 500 shots per minute theoretical rate of fire. All this is presented to us by the image of "maschinenpistole 40", abbreviated as MP 40, and in Polish it is simply a submachine gun.It was a modern construction for those times, but unfortunately quite troublesome and complicated to produce. For its category, it was just quite heavy, and the most troublesome element of the weapon in production was the breech chamber. Complicated technology was causing, that to the end 1940 year was produced only 40 000 copy. a version that precedes Mp 40, that is MP 38. It was far too little for the needs of the constantly developing Wehrmacht. The feed is from a double row, a characteristically long box magazine with a capacity 32 cartridges, with single-row exit (interchangeable with the magazine from MP38). In this case, the magazine latch button is located on the left side of the socket. Initially, the magazines had smooth side walls (exactly the same as the magazines from the MP38), while later special magazines with embossings were used to increase their stiffness. The magazine socket itself is located at the bottom of the castle chamber in front of the pistol grip, it has no holes for weight reduction. It was connected with another production process, which, under the pressure of time and considerable demand, could not be afforded. A metal stock, folded under the castle chamber, was specially mounted to the rear part of the pistol grip skeleton. Very useful when leading with the user's sensitivity - single fire at longer distances. On the left and right sides of the pistol grip there are covers made of ordinary bakelite. Bed, and the grip covers were usually black, however, there are also copies with a bed and brown covers. Manufacturing the MP40 itself was simpler and faster than producing the MP38, however, the newly developed weapon was more massive than its predecessor. Of course, the gun has a trigger mechanism that allows you to shoot only with continuous fire, however, due to the low theoretical rate of fire, firing a single shot shouldn't be a problem for anyone. In the next model, one number higher than the MP 40, a mianowicie MP 41 „Schmeisser”, firing a single shot, at the theoretical speed higher by 100 shots per minute (ok. 600strz./min.) would not be so easy, however, compared to the Soviet PPSz (do 1000 strz./min.) and so still feasible. But let's move on to some interesting modernizations.

One of the practical solutions of German technical thought is this, that the weapon can be equipped with a "winter trigger", facilitating its removal in thick winter gloves. Convenience of use, and the lack of frozen and ossified fingers - most of all ... It's worth mentioning, that MP 40 It was also produced for paratroopers who had to achieve the designated targets in a short time and by surprise. In this case, dealing with considerable heights (low temperatures) and the rush of air that intensifies the feeling of cold, this element becomes even indispensable for carrying out a smooth attack. Nay, they were often fired not only after having safely landed, but also parachuting, during descent.

Another idea was to adapt the appropriate silencer to the weapon. However, the cartridges used in the MP series were slightly different than the average pistols. Despite the illusory, the same pistol 9 × 19 PAIR, the ammunition had to be loaded completely different. Or more precisely - stronger. It was thanks to her that the German submachine guns were so loud, noticeably different from other average equipment of this class. Coming back to the mufflers, unfortunately, each prototype wandered in the basket, being just torn apart, be at least cracked. None of the engineers managed to harness the considerable power of the MP 40. Surprise parachute operations at night, in conjunction with the silenced shot of an automatic weapon, what was the MP 40, they would certainly increase the effects and reduce the losses on the German side.