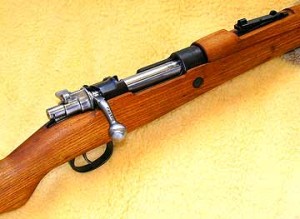 The beginnings of this amazing rifle go back a year 1908. The First World War and an inseparable companion of German soldiers, Gewehr 98 - left a lot to be desired. But that's it, as an older brother, inspired Mauser designers to take the next steps and create the Mauser 98k.A major upgrade for the better, was the change of the barrel of the weapon to a new one, 14cm shorter, which contributed not only to the improvement of accuracy, but also the convenience of its use by a soldier. Thanks to this, from the entrance he earned the nickname "dust" from its users, which simply meant "short". Thus, it fulfilled the functions of an individual repeating weapon. A four-bar lock was used in it, sliding-rotary. The lock is locked by means of two bolts placed next to each other. Initially, the rifle was produced only for export to other European countries, however, subsequent factors and the reliability of this design did, that it became the primary weapon of German soldiers. Already in a year 1935 was officially accepted into arms, as the known to us Mauser 98k. Powered by permanent, a two-row box magazine with a capacity of five rounds was more than enough to carry out the attack. The generally common Mauser rifle cartridge was used here 7,92 × 57mm. The initial velocity of the projectile was from 755 do 845m/s, and the practical rate of fire was around. 10 shots per minute. The maximum range was approx. 4000m, come on average, accurate shot was fired from a distance not greater than 1300 meters. Interestingly, copies with exceptional accuracy, which happened like 1 do 800, were set aside for special "sniper" models produced selectively for sharpshooters, including snipers. Additionally, the designers added "Schiessbecher" to the rifle. Thanks to this, at the end of the barrel it was possible to mount a grenade launcher, being an additional option of combat tactics.

The butt of this rifle has experienced a kind of wood "evolution". Depending on the state of the Reich's budget, Adolf Hitler, they were made of high-quality walnut wood, beech, oak, and ending with the cheapest plywood, which significantly worsened the values ​​of this weapon. This plywood forced a change in the construction of the buttstock, which, instead of a flat foot, received a cheap shoe pressed from sheet metal. The front swivel was replaced by a sheet metal band, and rifles ceased to be mostly equipped with bayonets and rods, necessary for maintenance and proper operation during prolonged use. More and more parts of the rifle were pressed, as opposed to milling them beforehand. Times, that followed the war, they carried many simplifications of weapons, including this one. Another example of this surgery is this, that the copies made in 1945 of the year, they often had a permanent sight at a distance of 100m and a shortened handguard (saving wood), mentioning, that some of them did not have any coating against corrosion and external damage. All of this may raise doubts in us; asking myself: “Is this really one of the better weapons of the time?"I have to answer, yes! And let not my personal opinion be the leading thought, but this, that despite the introduction of semi-automatic and automatic rifles, The Kar98k remained a regular Wehrmacht rifle until the end of the war. He served endlessly, even in the hopeless conditions of Stalingrad, he was a refuge for Hitler's frozen boys. Conquered by the Warsaw insurgents and partisans, it was an indispensable treasure, bringing joy and pride to the weapons in groups.

After the end of World War II and the defeat of the German army, Kar98k designs found their way to the arsenals of many countries, not only European. A large amount of this equipment has been used for years 70. in Israel, among others, come most Israeli Mauser 98k have been rebuilt to a more practical version, caliber 7, 62 × 51mm. Today, the dream of many collectors, history veteran!