A gas pistol as an effective form of self-defense. 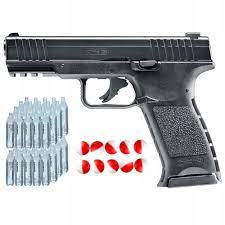 The main advantage of the gas gun is its appearance, resembling a real firearm. Thanks to this, there is a chance, that the attacker would get scared by the gun and give up the attack. However, if he considers the weapon a dummy, still at our disposal is a gas container hidden under the gun housing. Pepper spray causes a severe allergic reaction, skin irritations and makes breathing difficult. In effect, the attacker is incapacitated for at least several minutes, enough for us to escape.

Gas pistol.
The advantage of this type of weapon is the ability to load a magazine with bang cartridges, which
when fired they will make a noise identical to this one, which appears when fired with a firearm. Pressing the trigger also does, that a cone of pepper spray is fired from the barrel, which can incapacitate the opponent. This hybrid is a perfect combination of an alarm weapon and an effective self-defense measure.

Gas pistol prices.
We won't have to pay a lot of money for an effective self-defense weapon. We will buy the gun in the price range of PLN 120-200. The pepper spray cartridge costs PLN 30. In the case of gas pistols, we will pay little more, in addition there is the cost of bang inserts, which should not exceed PLN 50 per 50 pieces.

Summary.
With a budget of up to PLN 300, we can get a very good gas or boom-gas pistol with ammunition, which is perfect as a fully legal weapon for self-defense. Thanks to small dimensions, we can always have the gun with us.