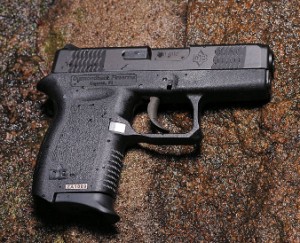 The DB380 is a pocket pistol from the American manufacturer popular in the West.

The weapon looks like on the manufacturer's picture attached above.

In this model, the manufacturer decided to supply ammunition from a 6-round magazine .380 ACP ? i.e. 9mm Browning ? once popular and often chosen, later on for the benefit of, among others, 9mm Para and a giant overseas ? that is of course .45 ACP.

Until recently it would seem, it's over for this cartridge ? even slight, compact pistols began firing cartridges, until recently considered strong and dedicated, however, to larger weapons; suddenly the fashion for the little nines returned with the development of new cartridges with HP bullets, which can compensate at least in part for the low knockdown power of this ammunition.

I am writing in part, because I do not know how it exactly translates into effectiveness in practice, however, logic shows, that it is difficult to achieve the effectiveness of even 9 × 19.

After one of my conversations about the effectiveness of ammunition, someone said, that since the bullet is capable of doing a wound enough ?specific? to kill, it is clearly an effective weapon.

I have even tried to explain why defensive shooting is not about mutilation and killing, and on the broadly understood elimination of the threat with the least possible losses, but the interlocutor kept his point - he asked a seemingly logical question: Since the losses in people are to be as low as possible, this is why stronger ammunition is recommended?

I replied quite convincingly: Term ?loss of people? it's not just about the striker, but also the person defending himself, if the defense is not effective, it is worse than the lack of defense, because it increases aggression and reassures the attacker, that he is in control of the situation, for once he was strong enough to quell our rebellion, is sure, that he would do it again if necessary. We know, that when it comes to the supply of 9 × 17 Browning ammunition, it is not the most powerful cartridge, but it's worth adding, Thanks to this, the recoil is small and the shooting, especially for women ? more convenient than with stronger ammunition.

Among other things, in connection with the above, and with ergonomics designed rather for people with small hands and moderate physical strength, this is a proposal for women.

The manufacturer, despite the already low recoil force, decided to release the DB380C model with a barrel ended with a small compensator. It misses the point for me.

Of course, who likes what.

The gun is dimensionally smaller than the Glock 26, and in his pocket class, the Ruger LCP comes to mind, and Sig-Sauer P238, probably some Kel-Tec model?a.

The mechanisms are taken from Glock?that, therefore after removing the zipper, average Glock holder?a should not have any particular problems with disassembling and reassembling.

Similar to the fourth generation Glock, and earlier in the H&K - a double return resistance device was used. It is definitely a solution that additionally contributes to the gentler behavior of the weapon during shooting, but looking at the DB380 I have an impression, that from Glock?only the external appearance differs, designed with the principle of maximum minimization in mind, the opinions of my colleagues from the west only confirm my feelings. The product is interesting and worth a moment of attention, but no revolution.