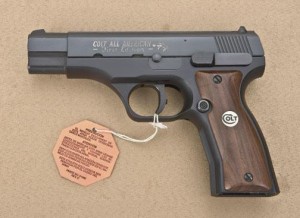 It is impossible not to notice at least a few brands on the defense market, which clearly lead the way among people interested in the topic. Colt is one such brand without a doubt.There was excitement about this American legend in the middle of the 19th century, when new models of front-loading revolvers were introduced to the market, at the end of that century, as the Wild West conquered the Peacemakers for merged ammunition; but also at the beginning of the 20th century, when J.M.. Browning with M1911 at the helm, took the hegemony of revolvers, until the legendary M16 assault rifle finally appeared (AR-15) construction E. Stoner and its later versions.

The essential question, whether a brand with such a past is able to launch a product on the market, which won't sell very well, or otherwise - it will be a commercial flop? You already know the answer - you have read the title of this article. Colt 2000 was the answer of the "American legend" to the era of "miracle nines", and a denial of everything (almost…) what the Colt reminded me of at least. Relative to M1911, polymer had crept in in place of the cool metal and wooden trim, a beater mechanism was used instead of a hammer. A two-row magazine that houses 15 pieces of ammunition 9 FOR, the grip has been significantly modified; although on the other hand it is difficult to speak, that something has been modified, if something new has been properly developed - I mention here a few dividing differences 2000 and classical 1911. Well, but is that why this product turned out to be a "flop"? After all, the Glock has a similar specification, whose enormous popularity certainly precludes it from being considered a "misfire" of the arms market.

The problem is that, that the proverbial devil is in the details. So that M2000 could compete with the leaders of the then market of "nines", would have to be particularly innovative, meanwhile, Stoner and Knight's "thundering polymer" did not stand out too much in this regard. Despite the misappropriation of the "ideals" of the domestic brand pistols, offered nothing special, which could convince the owner of the modernist Glock, or a conservative revolver, or… classical 1911. You can come to interesting conclusions by looking at the Polish WIST 94 i Colta All American (of the aforementioned M2000), Certainly, our designers were more inspired by it when constructing WIST. The M2000 pistol was produced between 1992-1994 version with polymer and aluminum frame and steel lock. The operation of this weapon is based on the principle of short barrel recoil, Interestingly, it is locked by turning it around its axis; apparently, the designers wanted to influence the accuracy and reduce the recoil in this way, the French MAB PA-15 also works like that. The weapon measures 190mm in length and 128mm in height. Width 32mm, unloaded weighs 930 grams, and with a full magazine of 1110g.

The pistol, no longer produced, did not survive strong competition from the European nines, at the moment it is only a valuable specimen in the hands of collectors.