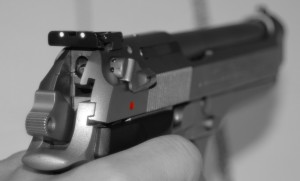 This Italian semi-automatic pistol is undoubtedly very famous, entered the list of the cult small arms. Flagship factors, which decided about it was the winning tender for the prescribed US Army pistol, and a huge dose of the participation of this weapon in sensational cinema.Lethal Weapon Series, "Glass Trap", or other "joyful" shooters, created the image of the Beretta for rapid-fire artillery, from which without worrying about the ammunition, we can spectacularly and dynamically flood the enemy with lead. The film Beretta looked good in Mel Gibson's hand, it did not cause any problems while shooting, and the handling of its manipulators was child's play and comfortable. As we know, sensational cinema does not count magazines, does not know recoil and is able to successfully level a whole host of other physical rules, to make the movie more interesting, more picturesque scenes, or production costs reduced. How does such a picture relate to reality? I admit, that from me and in the circle of friends, 92 will not get as good a mark as in the Hollywood advertising campaign. The Italian turns out to be capricious. Tends to lock up during dynamic reload, a manual fuse located on the lock, with frequent reloading with the Israeli "shock" system, it just interferes and hurts the hand. Beretta supporters explain, that you can get used to this specificity of the weapon, you just need to train your reaction to the self-protection of the gun. Well - here I will only refer to it this way, that the primary role of reloading is to initiate combat readiness of the weapon and, in its own way, to release it. Of course, not every copy has to have this disadvantage, but condemnation to acting with a gun, which in dynamic, a stressful situation maybe (maybe not, bo kto to wie…) protect us from our safety ... (it is about self-defense) is discouraging. The Beretta is a long gun, measures 217 mm and that's why I suppose, that it was designed for an outer holster. It is quite heavy and less handy for short distances than its competitors. In my opinion, these disadvantages disqualify this model as a recommended self-defense pistol, which we are going to wear secretly. Of the advantages, it is worth mentioning a decent build quality, good accuracy and, above all, important for collectors - a nice line, causing, that the weapon is so recognizable. The grip is relatively comfortable and does not throw off its texture.

The principle of operation is based on the short recoil of the barrel. Self-cocking trigger mechanism, with hammer impact mechanism - external cock. Powered by a 9 × 19 PARA cartridge, from double-row box magazines accommodating 15 cartridges. American soldiers, recollecting the glory days of the Colts in the caliber .45, They don't like that gun very much, though they mainly complain about the lower knockout force of the FMJ cartridge compared to the 45, and not cumbersome manipulators, weight or dimensions about which I have spoken; hence their skeptical opinion is directed towards ammunition rather than the weapon itself. An interesting offer for collectors and recreational shooters, in a word for enthusiasts of this model, or the cult action cinema in which it appears.