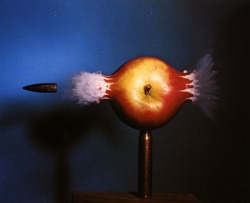 Some time ago I saw at the shooting range, like a person who is at the end of training for a shooting patent, while training with Glock17, turned to my friend, instructor with a grudge: "How am I supposed to shoot accurately, if this gun springs 30cm up when fired. Nothing unusual, that I'm shooting over the target. I would like something with less recoil, please, because it makes no sense ... "

So let's talk about it then, what happens to firearms during a shot.

Knowledge on this subject should be obvious to anyone interested - so I invite you to read the following article on these, who do not have this knowledge yet. I will try to discuss the topic in the simplest and most accessible way.

Mimo, that most people are aware of the presence of gunpowder in ammunition - few really have an idea of ​​the power of, with which the explosion in the casing affects the design of the weapon. It's hard to imagine at first glance, that such a small item, how a casing can hold a quantity of gunpowder capable of producing a large blast.

And indeed. If we put the powder from one such shell on the table and tried to set it on fire - first, we would fall asleep before we could even set it on fire., apo drugie, if it was successful, it would turn out, that our "explosion" is limited to hissing and a minimum amount of smoke. It would be the same with black powder, just setting it on fire would be a bit easier, and there would be a bit more smoke. So, or anyway - without any revelations.

The case is, however, completely different, if we lock the gunpowder in a hard one, sealed object. The pressure of the explosion rises rapidly to really enormous levels and hence comes the bang and the force, which is able to push the ball out of the shell, push it through a relatively narrow barrel and send it hundreds of meters forward. Against this, what most people think, if we want to throw a bullet into a barrel of a suitable caliber, it won't fly through it freely. Thanks to this, that the barrel is tight- the gunpowder gases are not as free to expand and escape sideways, walking around the globe and going in vain (it looks a bit different in "shotguns", smooth-barreled weapons, but that's a topic for another article).

Let's go back to the statement I heard at the beginning of the article. There is no doubt, that recoil and toss (obvious difference) they have practically no effect on this one shot fired by us.

Of course, the next ones may be less accurate, if we want to hand them over quickly one by one, but this is a matter of the next and the next and the fault of the fact, that it is simply difficult for us to quickly return the front sight towards the center of the target.

So what influences it, that the bullet does not actually fly out of the barrel in that exact direction, at which we aim?

A change from the line, which we really want to send the ball is actually relatively small, but it exists and is the result of many factors. Let's start with the fact, that the very movement of the mechanism in the weapon (descent, needle) causes the weapon to move. After all, the primer is smashed and not with little force. There are already some vibrations of the weapon here, hand. Then there is an explosion. For these, who were careful with physics - in a typical pistol ammunition, the pressure in the initial stage, at the time, when it is highest (at the moment of disconnection of the shell from the ball), is approx 100-300 MPa. In the case of e.g.. Magnum ammunition - much more. In a word, this value is really great and generates a lot of shock. But basically - a disturbing shock, or rather its disturbing phase - it takes place after the bullet exits the barrel. Nevertheless - the explosion is there, there is traffic. But most importantly - the barrels, mimo, that more and more advanced- they are not cosmic and there is no chance, so that the projectile passing through it would not make it vibrate. There are simply no miracles. That is why shots fired from one pistol come out of it at a slightly different angle each time. But it certainly is, at least in a good and operational weapon, I have no question about it, that one missile would fly 2 meters to the left, and others 3 to the right and one meter up. There is no doubt, that the statement at the beginning of the article was nonsense. The gun moves, considerable, but when our hand is thrown much up - the bullet is long far from the barrel. Such a recoil in the context of one shot does not interest us then. I guess, that we come up with some extreme type example - a weapon weighing this much, what a bullet. The effect of the shot would be obvious. As a rule - the heavier the weapon, the more mass it has, which will absorb the recoil. It still depends on a few factors - such, like barrel length for example, but the general rule is, as above.

Lots of people are wondering too, or, unfortunately, often states with "certainty", that the projectile reaches its highest energy precisely at the mouth of the barrel, and, that strength, with which it is thrown is so large, that the projectile flies straight for a long time and does not fall. Nothing could be more wrong. Earth attracts everything the same, indifferent, is it a standing car, or a ball flying at a speed of several hundred meters per second.

Projectile NOW after that, how it loses support in the form of a barrel, it starts to subside. As for energy- its highest value is slightly BEHIND the barrel, a moment before that, how gunpowder gases begin to expand rapidly(contrary to appearances, they do not lose power immediately after leaving the barrel, only slightly later) and escape into the atmosphere. Despite this indisputable fact, the velocity of bullets is often measured at some distance from the muzzle of the barrel. Often even a meter, two, three. Instructors are also asked about the bang of a shot and why one weapon of a similar caliber is louder than the other. There is no doubt, that it is the amount of gunpowder that matters more, not caliber, but obviously, one goes hand in hand with the other. More or less. Because ammunition in one caliber is often produced with various amounts of gunpowder. Combat ammunition, military, police often have a much larger amount of this material, sometimes too much, to safely fire sports guns of the same caliber, what a military counterpart. Which, however, still affects the bang? It is largely the speed of the projectile. Much of the noise in supersonic ammunition is the fault of exceeding the speed of sound. That is why many armies of the world use not only silencers for suppressed weapons (which allow the gases in their numerous chambers to expand. In Poland, they can only be used by appropriate services), ale i specjalnie przygotowaną mocną, but "slow" ammunition, not exceeding the said value. Part of the ammunition, from which we shoot pistols and revolvers at the shooting range belongs to the supersonic ones, and some to the other. As for rifles - only single types of ammunition do not exceed the speed of sound.