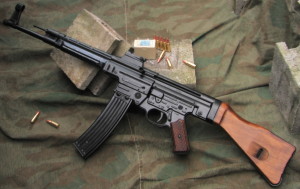 The beginnings of this incredibly popular rifle go back a year 1942. We all know, what kind of struggle is going on. On the battlefield, the Germans are waging powerful and fierce battles towards Eastern Europe, which each day seems to be a stronger and stronger enemy. The Great Red Army advances, and in the hands of German soldiers heavy and crude machine guns, often structures from a year ago 30. An example would be the MG 13 weighing over 13 kg, or even MG 15. Fascist commanders, taking into account the large scale of hostilities and their great importance on the fate of the Reich, they needed a new automatic rifle for an intermediate cartridge. Not your typical large and heavy machine gun, but a weapon that combines the features of a submachine gun (light weight, high rate of fire) with the characteristics of a rifle (considerable range, considerable debunking possibilities). After all, the soldiers experienced expansions far from their homeland, they needed a good rifle, reliable, and, above all, light. Any vessel that has heavy equipment with it (blankets, sleeping bags) Not a single kilogram was indifferent. Heat was an indispensable element, without which no one would be able to fight, and even experience.

So the weapons had to be built as quickly as possible. Realizację powierzono dwóm niezależnym wytwórniom – zakładom Karl Walther i C.G Heanel. Miała ona strzelać nabojem pośrednim 7.92x33mm (7.92 „Kurz”), resulting from shortening the shell of the 7.92x57mm cartridge. Prototypes of both rifles were manufactured, after which they were handed over to the military. After a few weeks of testing, you expressed their observations and evaluations. Ostatecznie przetarg wygrała ekipa C.G Heanel. Testowany Mkb 42(H) – Machinenkarabiner 42 trafił do masowej produkcji jako MK 43. The history of the names of this rifle reaches its zenith and there is no valuable message. Minor tweaks were made to refine the weapon a bit. Starting with MK 43, via Mkb 43 and ending with MP 43. summarizing, Hitler finally upset, by official order established the main name of the rifle, which his German boys were to worship. It happened and StG.44 (assault rifle 44) have met millions.

The original feature of the StG.44 is this, that most parts and components are stamped, and to their mutual connection, riveting and spot welding were the most commonly used. The rifle is powered by a removable arc magazine with a large capacity for ancient times 30 cartridges, with a double-row arrangement of them. The trigger mechanism allowed the shooter to fire both single and freely, and continuous. The weapon consists of the following parts: barrels with a gas chamber, breech chamber with a barrel mantle, drain chamber with a handle, lock, mechanisms: of the bolt, trigger and shock; return spring, a buttstock with a buttstock and a magazine with a feeding mechanism. It all weighed round together 5 kilograms, thus not overburdening the soldier. The effective range was 500 meters, while the practical speed did not go below that 100 shots per minute. The rifles were produced in the standard version, but there was also a version with a special overlay with a barrel bent at an angle 30 degrees for shooting from a tank. Unfortunately, not everything looks so colorful. The biggest disadvantage of this weapon was this, that it was wearing out quickly, a pocisk mógł rozpaść się w lufie. The service life of the weapon was only approx. 350 shots.

Sturmgewher 44 był swojego rodzaju innowacją, the most ordinary experimental prototype - the first assault rifle in the world. Z pewnością był przodkiem broni takich jak AK 47, M16, Famas. Wielu uważa STG 44 za broń nieporęczną, highly emergency, and certainly wears out quickly. However, given, that it is a kind of experiment on the part of German engineers (successful by the way) - I think, that you can turn a blind eye to it.